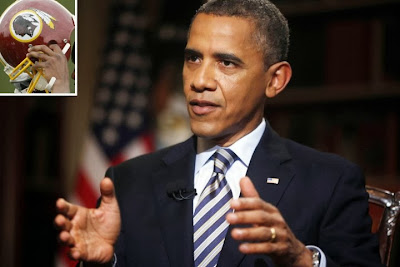 WASHINGTON — President Barack Obama says that if he owned the Washington Redskins, he would “think about changing” the team name, wading into the controversy over a football nickname that many people deem offensive to Native Americans.

Obama, in an interview with The Associated Press, said team names like the Redskins offend “a sizable group of people.” He said that while fans get attached to the nicknames, nostalgia may not be a good enough reason to keep them in place.

“I don’t know whether our attachment to a particular name should override the real legitimate concerns that people have about these things,” he said in the interview, which was conducted Friday.

An avid sports fan, Obama said he doesn’t think Washington football fans are purposely trying to offend American Indians. “I don’t want to detract from the wonderful Redskins fans that are here. They love their team and rightly so,” he said.

But the president appeared to come down on the side of those who have sharply criticized the football team’s name, noting that Indians “feel pretty strongly” about mascots and team names that depict negative stereotypes about their heritage.

Numerous colleges and universities have changed names that reference Native Americans. St. John’s changed its mascot from the Redmen to the Red Storm, Marquette is now the Golden Eagles instead of the Warriors and Stanford switched from the Indians to the Cardinal.

The Redskins’ nickname has attracted a fresh round of controversy in recent months, with local leaders in Washington calling for a name change and some media outlets refraining from using the name. The name is the subject of a long-running legal challenge from a group of American Indians seeking to block the team from having federal trademark protection.

Congressional lawmakers have introduced a bill seeking the same goal, though it appears unlikely to pass.

Opponents of the Redskins nickname also plan to hold a protest Monday outside the NFL’s fall meeting in Washington.

Team owner Dan Snyder has vowed to never abandon the name. But NFL Commissioner Roger Goodell said last month that the league should pay attention to those offended by the nickname — a subtle change in position for Goodell, who had more strongly supported the nickname in his previous statements this year.

Despite the controversy, an AP-GfK poll conducted in April showed that nationally, “Redskins” still enjoys wide support. Nearly 4 in 5 Americans don’t think the team should change its name, the survey found. Only 11 percent think it should be changed, while 8 percent weren’t sure and 2 percent didn’t answer.

Obama said he doesn’t have a direct stake in the Redskins debate since he’s not a team owner. But he hinted that might be part of his post-White House plans.

“Maybe after I leave the presidency,” he joked. “I think it would be a lot of fun.”

He added: “I’d probably look at a basketball team before I looked at a football team. I know more about basketball than I do about football.”