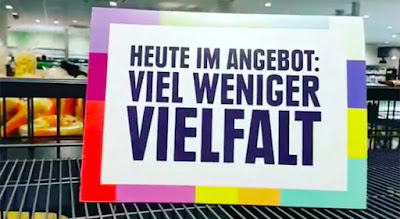 AdFreak reported on a grocery store in Germany that created stunt to promote diversity. Hey, why not? Germans embracing equality and inclusion is not much more peculiar than White advertising agencies doing the same damned thing.

What does a grocery store look like without Greek olives, Spanish tomatoes and frozen goods from who-knows-where?

You’re about to find out.

To emphasize the importance of global diversity in a context everyone can understand, German supermarket Edeka made a surprising decision: It emptied its Hamburg location of all foreign-made products.

For shoppers wandering around confused, signs featured messages like, “So empty is a shelf without foreigners,” “This shelf is quite boring without variety,” “Our range now knows borders,” and, “We will be poorer without diversity.”

People mostly believe what their range of experience permits. Protectionist policy thrives on such blind spots: It’s easy to be racist when the groups you’re demonizing are abstractions.

That’s what gives this work its oomph—nothing is more personal than access to and preferences for food, which guarantee a visceral emotional reaction.

Hamburg is the second most populous city in Germany, behind Berlin, with resident aliens composing nearly 15 percent of the population. But German opinion’s become pretty tense since Chancellor Angela Merkel announced an open-door immigration policy for refugees two years ago.

The decision led to the arrival of 890,000 asylum seekers in 2015 alone … and early this year, Germany announced plans to roll the policy back. (The stance did, however, boost Germany’s prominence on the global stage.)

Online, vice chair of the Christian Democratic Union Party Julia Klöckner praised the campaign, calling it “a wise action” that would give people pause. The comment generated a bevy of replies, including one from Marcus Pretzell (no longer visible), representing an immigrant-hostile party, Alternative for Germany: “Why exactly should it be wise? Is it not rather completely mad?” he was quoted as saying, per The Independent.

Edeka’s got a reputation for producing the kind of quirky, unhinged advertising creatives look forward to. (2014’s much-lauded “Supergeil” comes to mind.) If you’re wondering why it would suddenly break tone to make a political stance this dramatic, consider that its work often has a moral bent.

In a 2015 Christmas ad, an old patriarch fakes his own death to compel his family to gather for the season. 2016’s holiday ad used an anti-consumerist message to remind people that being together is more important than gifts. And the controversial “Eatkarus” ad of 2017 is, at its heart, a story about embracing a path that alienates you from others—especially when you’re doing it for your own health and happiness.

“Edeka stands for variety and diversity,” an Edeka spokesperson said of the Hamburg activation. “In our stores we sell numerous foods which are produced in the various regions of Germany. … But only together, with products from other countries, it is possible to create the unique variety that our consumers value. We are pleased that our campaign caused so many positive reactions.”