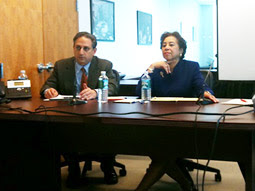 NEW YORK -- The Madison Avenue Project held a press conference today to release a study pointing out that the agency creative directors behind this year’s Super Bowl commercials were overwhelmingly white. But at least one industry representative said the press-first strategy is doing little to help diversity efforts.

The study comes from Richard Lapchick, director of The Institute for Diversity and Ethics in Sport (TIDES) at the University of Central Florida. It finds that for the 58 spots in which the study was able to identify the creative team, 92% of the creative directors were white males, 7% were white females and one lone creative director was Latino. The Latino was not an agency employee, but the winner of Doritos’ consumer contest.

There were actually 67 total spots, though TIDES was not able to find the race and gender of every creative director. In at least one discrepancy, agency founder Guy Barnett was counted as a creative for The Brooklyn Brothers’ KGB spot (though one executive familiar with the matter says that the copywriter and art director are two white males). Mr. Barnett declined to comment.

The press conference is the latest move from civil rights lawyer Cyrus Mehri and Laura Blackburne, general counsel for the NAACP. Mr. Mehri’s law firm and the NAACP are investigating a class-action suit against the ad industry for discrimination. Since forming the Madison Avenue Project, the team has filed charges against ad companies with the U.S. Equal Employment Opportunity Commission.

Agency involvement
While the study highlights the ad industry’s longstanding problem with diversity, it is also keeping that discrimination investigation in the headlines. This attention, paired with a lack of dialogue with agency leadership, could hinder real change, said American Association of Advertising Agencies CEO Nancy Hill.

“I think it makes it difficult, especially if agencies aren’t invited to have a discussion,” Ms. Hill, the only agency representative at the press conference today, said of the project’s press-first strategy. “It makes it feel like [the Madison Avenue Project] doesn’t want to have a conversation.”

Mr. Mehri said none of the agencies responsible for Super Bowl spots were explicitly invited, though he pointed to Ms. Hill’s attendance. Ms. Hill said she was not invited, but found out about the public event through other channels.

When asked if the lawsuit’s news coverage has indeed closed off conversation with agencies, Ms. Blackburne called that response “bull.” “Harder to have a conversation?” she said. “Please.”

The study focused on only on lead creative directors behind the commercials, not producers, account executive or chief marketers on the client side. Data for the study was obtained from direct contact with agencies and websites of Ad Age sibling Creativity and Ads of the World. The study lists each spot, the agency, the creative directors and those individuals’ races and genders.

The study called out offensive ads for perpetuating stereotypes. Among those was Flo TV’s “Injury Report” from Spokane, Wash.-based Magner Sanborn and Los Angeles-based Agency 3.0 for its negative portrayals of controlling women, and Anomaly, New York’s “Megan Fox” spot for Motorola that portrays the actress as a sex symbol in a bathtub.

“Clearly we’re disappointed they feel this way,” said Jason DeLand, co-founder and partner of Anomaly. “We recognize that diversity is one of the most important issues in our industry. We take great pride in our effort to create a diverse agency and would welcome a dialog with the NAACP to further our shared commitment.”

Mr. Lapchick’s graduate students say one agency that did it right was St. Louis shop Cannonball for Bud Light spots that cast minorities in lead roles. Volkswagen’s “Punch Dub” from Deutsch, Los Angeles, was cited as another good example. It ended with cameos from black celebrities Tracy Morgan and Stevie Wonder. Creatives from both these agencies were also white men.
Posted by HighJive at 9:50 PM

Nancy Hill is officially fulla crap. She and the 4As didn't create this turd, but they keep spraying perfume on it and trying to call it chocolate.

Hill has no interest in diversifying the industry. None whatsoever.

Hypocrisy always comes to light at some point...

Sun's up, heffas. We see you for what you are now.

Most people who say they are actively involved on fixing "diversity in advertising" is a fraud. From the agencies right up to the minorities who become diversity spokespersons, and officers.They can live with the mess and crap, because they get paid, get a position, a awards ceremony and it gives them a voice they would normally not have or even see. Your right nancy hill could care less. She's getting paid obviously by these agencies, why not blame the minorities for not having open dialogue. Notice how it went from not noticing a problem to saying there's not a problem to we know there's a problem but we dont have the money to fix, to know these "minorities" won't have open dialogue with agencies to fix the problem. What wrong is she's riding both sides of the fence. Last month at the 4a's transformation conference she gave passionate speech about agencies needing to reflect the diversity of today's society now she's pulls a complete 360 saying minorities are not engaging in open dialogue with the agencies that won't hire them. WTF! I don't mind because she's white, on the minority side u got folks preparing for another meaningless diversity awards show with their fearless leader tiffany warren giving no info on the progress or ideas shes made at omnicom in fixing diversity within that holding company. Everybody is full of shit, only this time minorities from the NAACP are probably going to be going in alone. I dought anybody from the diversity side is gonna back something that's going to expose them as the frauds we know they are.