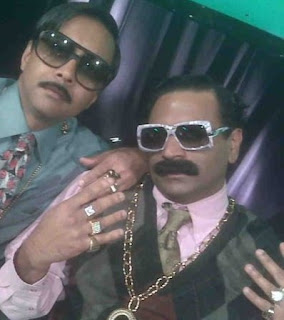 Here’s a delayed follow-up to the MetroPCS debacle from last month.

As it turns out, the Tech & Talk campaign featuring culturally clueless stereotypes is the work of The Richards Group in Dallas. This is the same White agency that swiped the Latino portion of The Home Depot account, using its small department of minorities to beat out major multicultural shops.

The Richards Group website boasts about a culture where people are scrambled, intermingled and not segregated. However, the leadership photos appear to be predominately White and male.

The MetroPCS commercials certainly show the level of sensitivity and expertise The Richards Group can bring to non-White advertising. Look forward to telenovela parodies and soccer-infused imagery for The Home Depot. And don’t be surprised if General Motors taps the Texas firm to cover some Black assignments too.

Hey, diversity is cool when Whites want to play in the multicultural arena. Not so much when colored folks seek to infiltrate the general market world.
Posted by HighJive at 12:00 AM

this is the future... beware. it's coming. Omnicom shops are doing it. WPP... they're all doing it now.

But I have to know, HJ - if you maybe laughed just a little at the Tech and Talk stuff.

Honestly, Jetpacks, not even a little.

Did you hear that sound? That was the sound of all future MultiCultural advertising being sucked out of minority shops.

Also I didn't find it funny at all. I am most often caught up in a guilty snicker or two, but these ads left me appalled from the moment I saw them.

FYI, for anyone who noticed or cares, a few comments were removed from this thread, mostly at the request of the commenter. As always, this blog is designed to serve as a forum for debate and enlightenment. Thanks.

Oops, deleted too many comments. Here’s an original comment, followed by our response:

I suspect you won't publish this, BUT, here goes:

I suppose it would make no sense that the featured actors in this ad weren't white (Wait, what, they weren't!? How could that be!?).

You decry the Richard's Group for having a stacked upper management team of white men (I'm sure there's no way they might have gotten there on their own merit, so it must be a racial conspiracy). Very well. If you are inferring that they might need some affirmative action, then I will explicitly suggest that your blog does as well. I believe you should share your page with contributors who are willing to call your views out as being ACTUALLY racist for not taking away, but ADDING to any racial rifts/differences and for passing blame to members of a race other than your own for anything with which you might disagree.

You say your page is privately held, and is your own to do with as you please? Oh, well so is the Richard's Group.

Someone once said you can't give offense... you can only take offense. Regretfully, it seems that you and your readers have made a habit out of TAKING offense. Truth is, there is legitimate humor in stereotypes, and it is relatively harmless most times. As a white guy, if I can laugh at white stereotypes (as I'm sure you would), why can't we laugh along with other ethnic stereotypes?

This blog has always been about debating and offering differing opinions. If you visited regularly, you’d know that. In fact, this blog exists to offer different opinions versus the standard perspectives delivered by typical White agency executives.

Never decried The Richards Group for their exclusivity, or implied a racial conspiracy. That’s all in your paranoid mind, friend. The Richards Group is not unique in the industry when it comes to exclusivity. Problem is, the exclusivity does lead to a certain ignorance—cultural cluelessness is a more polite term—on issues like the one presented by the MetroPCS campaign. Please re-read the original post by Bill Imada at The Big Tent. Or visit the other blogs and online sources that have discussed the campaign. You’ll see that everyone isn’t sharing your amusement. But they must all be the type that takes offense, yes? Imada put it quite professionally when he opined that going for a cheap laugh via cultural stereotypes is so unnecessary. Better yet, go view the winners at Cannes, ANDY, The One Club or any other respected awards show. See how many winners play off racial and ethnic stereotyping. Sorry, but it’s a route taken by hacks. Or the culturally clueless. Or ignorant racists.

There’s always a simple test to prove the matter. Ask Stan Richards to present the campaign to a roomful of people of Indian descent. Not behind a one-way mirror in a focus group setting. Man up and proudly stand behind the work.

You wrote: “As a white guy, if I can laugh at white stereotypes (as I'm sure you would), why can't we laugh along with other ethnic stereotypes?” Um, that answer requires more work than you’re willing to do. But if you want to man up as well, I would recommend you take a baby step and peruse Corporate Tribalism by Thomas Kochman and Jean Mavrelis. Make an effort to address your ignorance. You really would benefit from the attempt.