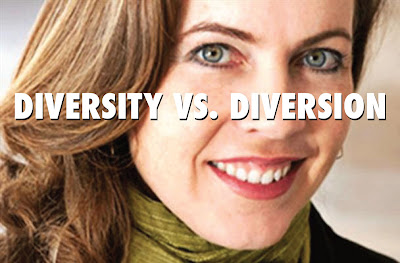 Campaign published a fluff piece featuring Kat Gordon, whose latest drivel identifies the eleven most destructive words for the future of creativity: “It doesn’t matter who does the creative as long as they are good.” Whatever. Actually, Gordon is still presenting the eleven most destructive words for the future of diversity: “White women face awful hardships and discrimination in the advertising industry.” The problem is, Gordon’s pathetic platform simply isn’t true—and it hasn’t been true for decades. Hell, White women don’t even agree there is a problem advancing in the field. By crying the sky is falling where no glass ceiling exists ultimately creates a false perception that allows White Mad Men and Mad Women to believe they are promoting diversity by jumping on the faux female bandwagon, effectively ignoring the minorities who continue to be excluded. Whether she realizes it or not, Gordon isn’t advocating diversity; rather, she’s advocating diversion. Appropriately enough, ADCOLOR® nominated Gordon for a Change Agent trophy. It makes sense, given that Gordon has changed the conversation—albeit by concocting a smokescreen that lets White people avoid accountability for the real diversity dilemma.

Kat Gordon, the founder of the 3% Conference, believes the most destructive 11 words for the future of creativity are, “It doesn’t matter who does the creative as long as they are good”.

She was speaking at her first UK 3% Conference, which is taking place today in London.

She said: “The next time you hear this statement, reflect on what it conveys. This idea is true but not complete.”

The problem with that attitude is that it ignores many of the cultural barriers that women face and the attitude leads to lazy recruitment – people hiring others who are like them, she said, adding, “It’s harder and takes more time to find more diverse candidates, but if you hire them, your creativity will prosper.”

Gordon said the idea that it does not matter who does the creative also ignores all the research from think tanks that consistently prove the best teams for creative output are diverse.

She continued: “If you don’t have a diverse team, you are automatically limiting the terrain for creativity. If two people think the same then one of them is irrelevant. Women have a different pool of life experience to draw upon.”

Clients are beginning to see the lack of diverse creative teams as a problem, Gordon said: “Clients know what their consumer looks like. They are not all young white men with goatees and messenger bags.

“When an agency looks uniform in a pitch, it’s a badge of irrelevance. A client will hire the other agency, but often they don’t tell you that’s why they did it.”

The 3% Conference started off in the US in 2012. The name was inspired by the fact that just 3 per cent of creative directors who were women. The figure has since risen to 11 per cent.

In the opening keynote this morning Gordon also argued that the industry values availability over creativity. She said: “The person who can work anywhere, anytime is the hero, not the one who comes up with the idea.”

People look down on women or men that leave at 5pm to pick up their children, or look after ageing parents, or work on a passion project but she said: “No-one looks at the fact that person came in at 7am, worked through lunch and didn’t play fussball for two hours.

“Some people think becoming a parent is going to be a detriment to your creativity but it gives you a dramatic new life experience to draw upon, becoming a new parent can stretch you as a person.

“Creativity almost never flourishes in an agency, or at 2am in a war room, it happens when you have a life.”

Urging men in the industry to be mentors to women, she said: “A lot of men are afraid to mentor young women because it looks unsavoury. They don’t want to take her to lunch, or the client dinner so women get less exposure to the leadership.

“The young women need you more than you know. Don’t care if people are winking behind your back. Do the right thing and mentor the women and the men.”

Gordon also advised young women to teach themselves to be persuasive presenters of their ideas, which will decrease the amount of unpredictable hours they will be asked to work.

I hope Kat Gordon doesn't damage the push for ethnic diversity in the UK the way she damaged it in the US.

This feels like the first year the UK has surpassed America in raw and honest discussions of race in advertising & media (progress or lack of it is a whole other conversation), and it would be a shame to see that shut down and shifted over to generic 'women in advertising' discussions instead.

RE: the Sapient Nitro lineup. How can the ad industry do that (an entire series of talks about diversity that never mentions ethnic diversity once) with a straight face?