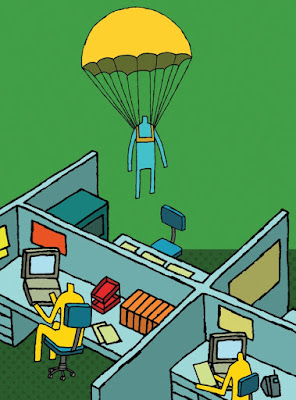 Adweek reported on a SapientNitro program designed to help executives return to the advertising world after extended time away. First of all, why would anyone ever want to return to SapientNitro? Second, the program appears to be catering to women. Third, it’s worth noting that SapientNitro Chief Experience Officer Donald Chesnut said, “Valuing life experience as much as work experience is important. It’s been a blind spot in our culture. We talk the talk about valuing different things, different perspectives. It’s time to walk the walk.” Okay, but why not apply such open-minded thinking to diversity? It’s so typical for White advertising agencies to hatch schemes for returning White women—yet do nothing towards recruiting and retaining minorities.

SapientNitro’s program could serve as a model

Sue Vering was an associate creative director at DDB Chicago when she left in 1998, ultimately taking seven years off from the ad business to raise her daughter, get involved in community activities and write freelance features for the Chicago Tribune. By 2005, when circumstances dictated a return to agency life, she found herself at FCB Chicago, on the KFC account, and struggling to fit into a world that had grown unfamiliar during her absence. Many nuances of the business—from technology and workflow to the office jargon—seemed strange. “It was a lot more difficult than I thought it was going to be,” said Vering. “Even coming physically to an office every day was disconcerting and disorientating. You put up this front that it’s seamless. It’s not.”

Stacy McIntyre knows that feeling all too well. In 2000, she left her account director position at Boston shop Greenberg Seronick O’Leary & Partners to start her own business and then a family. After a decade away, she re-entered agency life at Boston’s Allen & Gerritsen. “I returned as a very junior coordinator,” she said. “It was a very different world than years’ prior, and I had a lot to learn. It was like having a first job again.”

Vering and McIntyre are among the lucky ones as ad professionals who successfully returned to the industry—in each case, leveraging personal connections to secure jobs—despite huge gaps on their resumes. Both are thriving in the business today. Many such applicants, however, fail to transition back into the agency world. Some never make it past the interview stage. A disproportionate number of these people are women, who often leave the business to start families or care for loved ones. Experts predict that the ranks of the returnees will swell in coming years, and some believe agencies should take steps to ensure that such candidates, with years of valuable knowledge and experience to offer, get a fair shot at being hired, and a chance to thrive when they do.

So far, there has been scant support for such applicants, making returns for people with resume gaps especially tough given the youthful culture often cultivated by today’s agencies and the quick-changing nature of modern media, marketing and technology. Last week, however, taking its cue from initiatives in the financial sector (from firms like Goldman Sachs), SapientNitro debuted a 10-week paid pilot program that could serve as a model for agencies to follow. The program was developed by Sapient in conjunction with Red Cliff Marketing cd Hélène Côté, who leads “returnship” initiatives for The 3% Conference, which champions creative female talent and leadership.

Sapient has accepted its first two returnees, one of whom, Carol Hansen, left the business nine years ago after rising to global creative director and e-marketing strategist at PR Newswire’s parent company. Until Sapient brought her aboard, “there just wasn’t anything out there for me,” she said. Now, after a few weeks of immersive training and mentoring, she’s helping to develop an app for MasterCard. “I’ve really caught up,” she said. “I get it. I understand the process.”

Does Sapient hope to keep Hansen—and its other program participant, Rainy Orteca, who is studying UX on a scholarship at tech school General Assembly before joining the agency—long term? “It’s more than a hope,” said Donald Chesnut, Sapient’s chief experience officer. “It’s an expectation. Valuing life experience as much as work experience is important. It’s been a blind spot in our culture. We talk the talk about valuing different things, different perspectives. It’s time to walk the walk.”

The bottom line, according to experts, is that seasoned returnees, owing to the depth of their experience, intense job focus and drive to succeed often exceed limitations. That’s certainly true for Vering, still at FCB, now leading about 35 staffers as svp, group creative director; and McIntyre, who, after five years at A&G, joined Santander Bank’s internal agency as a senior campaign manager.

I'd like to be optimistic and say that because ethnic women have larger families this might be a good thing to loop them back into agencies they left behind.

But the pessimistic side of me says there were never any ethnic women in the ad agencies to begin with (at least not in creative positions or management positions).

So all this feels like is a go-nowhere feelgood "diversity" initiative that, yet again, primarily benefits white women.