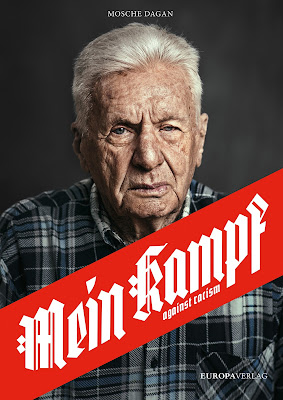 Adweek reported on a campaign by Ogilvy Berlin that countered the republishing of Adolf Hitler’s Mein Kampf with the publication of “Mein Kampf gegen Rechts”—which translates to “My Struggle Against Racism.” Um, White advertising agencies should contemplate their own struggle with racism by looking in the mirror. Or looking in their hallways. Then again, Ogilvy Berlin is part of the WPP network, perhaps the most diverse example of diversity of any single organisation.

Ad of the Day: How Ogilvy Berlin Fought Back After the Republishing of Hitler’s Mein Kampf

Adolf Hitler’s notorious autobiography/fascist screed Mein Kampf (translation, My Struggle) was published in Germany this year for this first time since 1945—after the Bavarian government’s copyright expired.

Predictably, its appearance caused much Sturm und Drang. It also generated a powerful response from the Berlin office of Ogilvy & Mather, which produced a competing book, Mein Kampf gegen Rechts (My Struggle Against Racism), in an effort to combat right-wing extremism and intolerance.

Ogilvy’s effort spotlights 11 diverse individuals who have fought against xenophobia and injustice. They include concentration camp survivor Mosche Dagan, former Afghan refugee Wana Limar (now a host at MTV) and Irmela Mensah-Schramm, who has dedicated her life to removing Nazi graffiti wherever she finds it.

The latter, a white-haired granny, cuts an especially memorable figure in the project video below, proclaiming “I want to destroy hate” while brandishing a spray-paint can in one hand and a brush in the other.

It’s sobering to consider that Mensah-Schramm has removed more than 100,000 images of Nazi slogans and hate propaganda in the past 30 years, a fact that underscores the need for more ammunition in the struggle against bigotry and ignorance.

“Due to the immigration of refugees, we are facing in Germany a growing right-wing extremism and an open everyday racism,” Tim Stuebane, executive creative director at Ogilvy Berlin and leader of the book project, tells Adweek. “In the last election, a new right-wing party shot from 0 to 24 percent. All this is very painful to see. We had to do something against it, but what? Then we learned that Hitler’s Mein Kampf would be republished. We thought—absolutely the wrong signal at this point of time.”

The project seeks to “reclaim the conception of the words Mein Kampf from the Nazis [and] create a spectacular trigger for PR and social media to talk about the current situation of society in Germany” and elsewhere, Stuebane says.

Those missions have been largely accomplished. Clearly, Ogilvy’s book touched a nerve in Germany. The first printing of 11,000 volumes nearly sold out, with 1 euro from every sale supporting Gesicht Zeigen, a nonprofit group that fights for social justice. Copious media coverage has spurred a broader conversation, which Ogilvy hopes will turn Mein Kampf gegen Rechts into Unser Kampf gegen Rechts (Our Struggle Against Racism).

Stuebane calls on people working in media to join the cause. Their power to inform and shape public opinion, he says, could prove invaluable. “Imagine doctors watching an accident, doing nothing,” he says. “That’s [the same thing as] communication professionals [silently] watching the rise of right-wing populism. It’s our duty to do something against it.”

Indeed, there’s an urgent need for more voices of sanity to rise up and drown out the din of fearmongering that rings louder than ever these days.

Seven decades after Hitler’s demise and the defeat of the Nazis, the struggle continues.