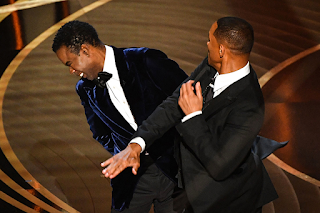 There is already plenty of commentary regarding Will Smith smacking Chris Rock at the Academy Awards show—including discussions about race-based inequities and gender-based insults—but here’s one more.

The New York Post wondered if Smith could lose his Oscar should the Academy enforce its 2017 code of conduct that “emphasizes the importance of ‘upholding the Academy’s values,’ like inclusion, fostering supportive environments, and ‘respect for human dignity.’”

The Post story stated that when the code of conduct was issued, Academy of Motion Picture Arts and Sciences CEO Dawn Hudson wrote, “There is no place in the Academy for people who abuse their status, power or influence in a manner that violates recognized standards of decency. The Academy is categorically opposed to any form of abuse, harassment or discrimination on the basis of gender, sexual orientation, race, ethnicity, disability, age, religion, or nationality. The Board of Governors believes that these standards are essential to the Academy’s mission and reflective of our values.”

Indeed, the Academy was quick declare that it “does not condone violence of any form” after the Smith-Rock altercation. 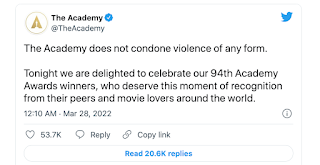 The scenario poses a diversity-related dilemma for sure. After all, if Smith were reprimanded for his violent outburst, could Rock also be subject to disciplinary action for his joke? As has been reported, the recipient of the off-color remark—Jada Pinkett Smith—is affected by alopecia, an autoimmune disease. In short, Rock’s “G.I. Jane” joke could be deemed as publicly shaming a person with a disability. That’s grounds for dismissal in most professional settings.

The incident definitely presented opportunities for a variety of teachable moments. And it underscores the need for forgiveness across the board. In the words of Marvin Gaye:

We don't need to escalate

You see, war is not the answer

For only love can conquer hate