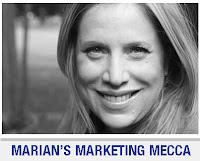 Essay 2058 presented a story from The New York Times on advertising to American Muslims. The piece was actually PR hype generated by self-proclaimed futurist Marian Salzman, executive vice president and director of strategic content at JWT in New York.

MultiCultClassics spotlighted Salzman in Essay 1034 after she authored an Adweek editorial schooling the masses on urban culture, displaying all the street cred of a typical Madison Avenue wigger. Salzman’s website, as you may recall, claims she “identified such trends as wiggers.”

The American Muslim market is Salzman’s latest hustle. And once again, Adweek provided her with a publishing pulpit.

Salzman proclaims, “Over the past year, we’ve become acutely aware that most brands and marketers are turning a blind eye to the multibillion-dollar American Muslim market. Maybe they don’t recognize that there is an opportunity. Maybe they harbor some of the anti-Muslim fears and prejudices that are so apparent in American media and public life. Maybe they are scared of offending American Muslims, or they fear that by embracing Muslim consumers, they will alienate non-Muslims.”

Maybe Salzman needs an education on American advertising. Most brands and marketers have been turning a blind eye to every minority in the nation. Sure, folks might claim that Blacks, Latinos and Asians receive targeted efforts. But even these segments are grossly underrepresented in the standard marketing plan—just as they’re underrepresented in the standard ad agency. Now Salzman recommends creating another segregated corporate ghetto. Brilliant!

Salzman asks, “Why this group? Why not another growing niche consumer segment that may prove less challenging to understand?” Good questions. The woman has already demonstrated cultural cluelessness with more popular minority groups. Prospective clients ought to wonder why Salzman should be trusted with any non-White audience. Or for that matter, any White audience.

The whiz kid reveals, “Our research shows that while Muslims are actually more brand aware than the general population, they see themselves as largely ignored by marketers.” Yo, Marian, you can substitute “Muslims” with any minority label in that sentence and it still rings true.

Salzman closes by making an inane argument that marketing to American Muslims will ultimately build bridges across society’s multicultural landscape. Damn, she probably thinks she deserves the Nobel Peace Prize for that brainstorm. If this woman only spent a minute examining her own field, she’d realize her hare-brained dreams have failed to play out in similar instances—at least 100 percent of the time. Hey, futurist lady, drop the crystal ball and gaze into the past and present.

Salzman needs to construct a bridge from insanity back to reality.

[Click on the essay title above if you want to waste your time reading Marian Salzman’s Adweek editorial.]
Posted by HighJive at 7:58 AM

some people rise to the level of their own incompetence. some stumble a little bit higher. i think Salzman and Julie Roehm ought to go hang a shingle somewhere.

"Salzman, Roehm & Deutsch" even... Just for some balance, you know