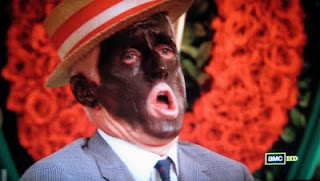 Just wanted to briefly elaborate on the latest episode of AMC series Mad Men, tapping the perspective by Latoya Peterson. Creator Matthew Weiner really is culturally clueless, especially when dealing with Blacks. But more importantly, Weiner is dishonest in racial depictions, despite boasting the program is historically accurate. Last night’s installment crystallized the point. Through Carla the housekeeper, Weiner continues to present Blacks as noble and heroic—victims who stand with dignity in the face of adversity. Yet the show’s creator is simply unable or unwilling to reveal the true faces of Whites, opting to go with a cartoonish Blackface scenario that appears wildly outdated. Roger Sterling is so bizarre that White audiences will barely take offense. Weiner hasn’t hesitated to allow the Mad Men cast to display anti-Semitism, sexism and homophobia. Why won’t he let the characters show the true racism of the period?
Posted by HighJive at 4:24 PM