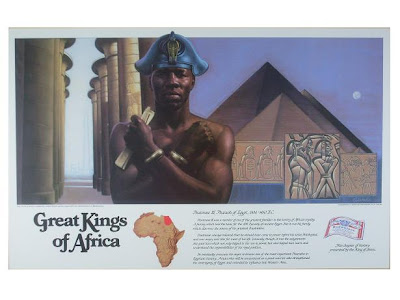 Advertising Age reported Anheuser-Busch InBev is launching Budweiser “Black Crown” beer. Sounds like a perfect fit for Translation and Steve Stoute. They could even bring back the Great Kings and Queens of Africa promotion.

The brewer has asked for and received approval for a proposed label for the higher-alcohol Bud line extension, described as a “golden amber lager” that is “distinctively smooth and beechwood finished,” according to this application with the Alcohol and Tobacco Tax and Trade Bureau.

The brew is listed at 6% alcohol by volume, which would put it a full point above regular Budweiser’s 5% ABV, and match the alcohol content of Bud Light Platinum, which was launched in early 2012 and has found early success. AB-InBev declined to comment on the Black Crown application.

Platinum benefited from a big ad push, including two Super Bowl spots. The timing of the filing for “Black Crown” suggests that it could be in line for a similarly hefty ad backing. Still, it is too early to tell AB-InBev’s exact plans for the brew, including whether or not the company will make it part of its beer portfolio or if the new extension is simply being considered.

The brewer is scheduled to hold a meeting with distributors in early November at which time big plans are usually announced. The lead agency for Budweiser is Anomaly, while Translation handles Bud Light.

AB-InBev has also filed an application for “Beck’s Sapphire,” a potential line extension for Beck’s which is described as having “German Sapphire Hops,” according to the application. Sapphire, incidentally, is also listed at 6% ABV.

The potential line extensions come as big brewers put more attention on innovations as they compete with newly aggressive liquor brands and craft brews, many of which have higher alcohol contents than traditional light lagers such as Bud Light and Miller Lite. The brewers seem to be targeting a mid-level price range that positions their new brews as slightly less expensive than craft brews but still at a premium to mainstream lagers.

MillerCoors, for instance, is out with “Third Shift,” an amber lager that is priced a bit lower than the average craft in a category MillerCoors is calling “invitation” beers. Earlier this week MillerCoors Chief Marketing Officer Andy England told Ad Age that he sees a “huge mid-level price opportunity.”

Budweiser has already tested line extensions on a limited basis this year with its “Project 12.” For the project, brewmasters at 12 AB InBev breweries created their own small-batch “tribute” beers, each with a distinct style. The brewer pared the list of creations to three brews made at breweries in Los Angeles, St. Louis and Williamsburg, Va. that will be available in a limited-edition sampler pack available beginning Oct. 29. The L.A. beer is an amber lager with 6% ABV, which, on the surface, sounds kind of similar to Black Crown.