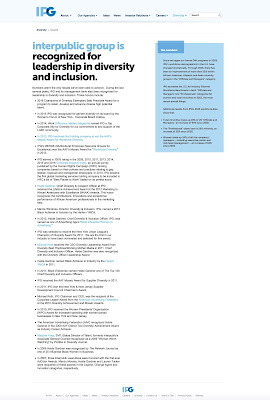 A MultiCultClassics visitor pointed to IPG’s self-promotional hype on its alleged diversity and inclusion achievements. Included is the recent Champions of Diversity Award for Exemplary Best Practices presented to the White holding company by the New York Urban League. Not included is the fact that IPG Senior Vice President, Chief Diversity and Inclusion Officer Heide Gardner is on the New York Urban League Board of Directors. Also not included is any mention of Campbell Ewald, Champion of Cultural Cluelessness. Ditto any references to former Draftfcb President and CEO Laurence Boschetto’s vow that “by 2014 [Draftfcb] will be an organization that no longer uses the term ‘diversity and inclusion.’” Hell, Boschetto wasn’t even listed among the ADCOLOR® Award winners, despite his first-ever Advocate Award recognition. Talk about not being very inclusive.

Worth noting are “the numbers” IPG presents as proof of its progress. Unfortunately, the numbers are not really numbers; rather, the information is stated in percentages. Does a 94% increase since 2005 of total minorities with “officials and managers” titles really mean anything without specific figures? For example, a 94% increase of, say, a dozen individuals would not be very impressive. Plus, how many of the “minorities” are actually White women?

IPG could become a pioneer in the category by publicizing EEO-1 data. But that would require integrity—as well as a spine versus spin.

Instead we have Campbell Ewald throwing Ghetto Parties and no one saying "boo" for four months, countless millions of dollars in accounts on the line (goodbye, USAA, goodbye protest of the Navy) and white women serving as the only visible face of diversity.

That is some mighty, mighty spin going on at the IPG diversity statistics page.

I especially like the "total minorities" detail, because that gives IPG free reign to lump anyone they want in there and call it a victory.

All joking aside though, just how bad are the ethnic diversity numbers exactly, if they're going to such enormous lengths to fudge them?