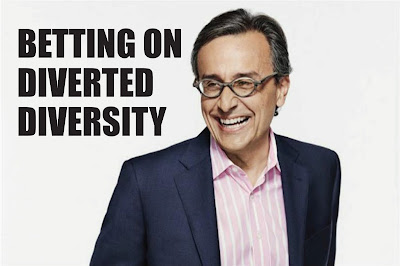 Campaign probed HP Chief Marketing Officer Antonio Lucio on his diverted diversity demands to White advertising agencies, whereby the technology company is taking a White-women-first approach to igniting inclusion. Lucio requested that his White advertising agencies present proposals on how they intend to boost White women and minorities, and the CMO reported feeling “incredibly pleased” by the submissions. However, Lucio declined to publicly share the brainstorms. Given Omnicom’s refusal to expose its EEO-1 data, it’s unlikely shops such as BBDO will openly reveal their cultural concepts—which probably include comic books and diverted diversity councils that will be entered at Cannes for a Glass Lion. HP’s tagline is: “Keep Reinventing.” Alas, Lucio’s half-hearted move will likely keep reinventing the smokescreens and schemes that have made true diversity a dream deferred, delegated, diverted and denied. Bet on it.

HP was the first brand this year to issue an ultimatum to agencies: put more diverse staff onto the account, or else. The PC and printer maker’s roster of agencies — BBDO, Fred & Farid, and Gyro — were given a month to propose how they would boost the number of women and ethnic minorities in senior account positions.

Asked whether HP had evidence up its sleeve that diversity led to better output, Lucio said: “That’s our bet.

“Our bet is that when the staff we have adequately represents populations we serve, our output will improve.”

After a visit to design agency Ideo, Lucio said he was impressed by the way the company hired for cultural contribution, not cultural fit. “It delivers a higher innovation rate,” he said. “We believe that having a more diverse team in place will translate into better work, no question.”

The proposals from HP’s five agencies have landed in Lucio’s inbox. He wouldn’t comment on specifics, but said he was “incredibly pleased” by the agencies’ commitment.

“If we are able to live by what we have reviewed in the first meeting, we will see a significant improvement in the representation of women and people of colour in top leadership positions in creative and strategy,” he said.

Asked whether he would fire an agency that couldn’t make good on its promises in a year, he said: “We could do anything. We could change agencies.” He added that it “was not about the numbers, but business imperative.”

According to Lucio, 50% HP’s personal systems buying audience is female. The number is more like 45% on printers.

It has been almost a year since HP split into two companies, HP Inc and HP Enterprise. The former deals in personal systems and printers, while the latter covers infrastructure, software and services.

“The process [of splitting] is both challenging and interesting — you want people to embrace what the company is going to be,” he said. Lucio created the architecture for HP’s brand positioning, “Keep reinventing”, to keep the brand on-track during the split.

But Lucio continues to face a challenge in furnishing HP Inc with some cool, as the wider PC market struggles.

HP lost its number one position in the market to Lenovo last year. And in its third quarter, HP reported net earnings of $783m (£643m), down from $854m over the same period the prior year. Revenue was down 4% year on year to $11.9bn.

Lucio said HP had strong awareness, but lacked an “emotional” connection with consumers.

He pointed to a soon-to-launch campaign for HP’s printers, which focuses on people printing out their smartphone photos.

“People are significantly more attached to the tangible, so the insight is that in a post-digital world, people will discover the beauty of the tangible,” he said.

I can predict how most of those agencies responded.

"We'll institute a training program at the inner city middle school closest to our offices. Our leaders, mostly white, will visit once a month for a pep talk for an hour at the most, take photos, prominently feature those photos on our social media feed as proof of diversity, and stall on hiring any adults of color for years."

"We'll team with our holding company's other offices in Costa Rica / China / India / Spain / Argentina / Mexico / Colombia / Egypt and import workers from there. They'll mostly be from those country's upper crust, considered white or light-skinned in those countries, and have no interest in diversity issues in the US. As a matter of fact, most of them will steer clear of casting or hiring anyone with dark skin once they're in positions of power in America, but we'll give them a visa anyway and claim diversity points for hiring them."

"We'll institute a 'blind resume review' for incoming candidates, but only for fresh out of college graduates in technical, not creative, positions. We'll play our diversity efforts up in the press and in communications with the client, and hope most people don't notice that this does nothing to diversify the roles that decide how ethnic groups are seen by wide audiences."

"We'll start an internship program at HBCUs, or commit to MAIP. Again, only one or two incoming interns and low level hires will be Black, but that lets us stall from making any real hiring changes for years."

"We'll make sure to insist that it's really a training issue that's holding people of color back in advertising. We'll hammer home that they aren't aware of advertising as a career choice, and aren't trained enough to just jump in and be hired off of 'promise' and 'cultural fit' like our white female friends and college bro buddies are."

"We'll double down on our efforts to hire the white female friends, relatives and acquaintances of all the white guys already in our agencies, and who control who gets past our screening process and hired anyway."

I know 3 senior level talent who are black, who are being interviewed by BBDO. All three of these are more than capable, but have struggled to get the attention of White agencies.

This is not business as usual.

Neither is it perfect but finally, there is some movement.

Only this blog's writer has been harder and more direct about the issues of diversity for Blacks in advertising than me. And I respect that. But I sent out emails asking senior level talent that is Black to give me resumes so that I could get them in front of Omnicom through Antonio, and I got only 4!!! We can bitch and moan all damn day, but if we refuse to throw our hats into the ring than we are part of the problem.

Like everyone else, I want more but we cannot continue to act like every effort is dead on arrival. We've got to take a chance on something working. Because guess what, sitting in the stands complaining, isn't getting any of us paid.

And before anyone think I am going soft on advertising, check my latest blog on The Drum. I put my name and face to this fight. I am out here fighting to breathe life into my agency, and I get more of us in the game. Four damn resumes.

"But I sent out e-mails looking for resumes" is how 100% of the diversity problems in advertising begin, for minorities of any color.

When we limit opportunity submissions to a third-party filter (recruiters, reps, personal friends, insiders, people who have an inside line on a job) and their personal circle of acquaintances, we're only ever going to get their personal social circle. That's how bros staff bros who staff bros. Now and then we get someone of color helping staff someone of color, but it's mostly just bro-ville.

Sir, I don't know you. I'm very grateful and happy you spoke up about the sorry state of diversity in advertising, God knows it's needed, but if I got an e-mail from a friend of a friend asking me to submit my resume to YOU, not to HP or Omnicom, not going to happen.

I'd assume that Omnicom is once again punting and limiting its job search to friends of friends, which is what got the industry into the state it is in the first place.

There's no list of recruiters and reps in advertising. They are unseen, unable to be accessed except by a select few people already on the inside, and more often than not reject candidates using their own personal criteria ("Who's going to earn me more money?" "Much better to choose this Cannes winner from South Africa than a guy from the neighborhood nearest the agency who's only experience is the underfunded African-American ad market.") rather than the criteria of the person who'll do the hiring in the end.

Where is Omnicom and Antonio in all of this? Where's an actual legit process for job submissions, or a proper and publicly announced way for talent to put themselves in front of either of them?

Where is the proof of commitment and interest level from Omnicom to do outreach THEMSELVES, not through recruiters or open ended "commitment to diversity" statements that don't offer an actual, tangible place to start?

Then, where's the followup? Speaking from experience, ad agencies in the US love to put out vague calls for diversity but offer no one other than a part time VP of Diversity, shared between six other agencies as a consultant, as a roadblock in the way... Someone who doesn't interact with the departments doing the hiring in any meaningful way, if they know any of them by name at all, and sure as hell doesn't have hiring power to make any decisions.

If HP and Omnicom and all the other clients and agencies are serious about hiring diverse candidates, then they need to loudly and clearly announce a legit path for candidates to approach them, above and beyond recruiters, reps and third parties.