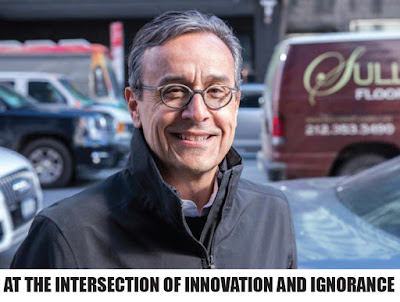 Advertising Age published a podcast featuring divertsity droning by HP CMO Antonio Lucio, who regurgitated the results of requests for inclusivity that he delivered to his White advertising agencies in 2016. Lucio revealed, “On the people of color side, we did not make as much progress as the agencies had agreed to.” He then coughed up the contrived excuses typically employed by White advertising agencies to explain the failure to embrace diversity. In the podcast, Lucio also covered the latest trends in marketing and technology. While Lucio appears to be on the cutting edge in certain areas of innovation, the man is woefully outdated in areas of inclusion.

There’s a lot of talk in the marketing and advertising industries about diversity—but not a ton of walking. Antonio Lucio is one of the walkers. In 2016 the chief marketing officer for HP called on the brand’s five agency partners to focus on improving diversity numbers.

“It starts from a company value: We believe that diversity is a business imperative,” Lucio tells Ad Age.

The results of year one were encouraging, but not stellar: The agencies employ more women, but still have work to do for minorities. “After a year, we went form 40 percent women working on our account to 60 percent,” he says. The number of women in agency leadership roles went from zero to 52 percent.

“That’s the good news,” says Lucio. “On the people of color side, we did not make as much progress as the agencies had agreed to.”

On the podcast, Lucio goes deep on his diversity drive, and also breaks down his view of the broader state of marketing in 2018. A veteran global marketer for Procter & Gamble and Pepsi (more than a decade at each) and Visa (more than seven years) before coming to HP two-and-a-half years ago, Lucio is an anomaly in CMO circles: He tends to last longer than the average four-year tenure. “I like to build things and stay in places,” he says.

And, of course, each marketing role has come with its own set of challenges. At HP, Lucio says the current quandary is getting millennials—and their kids—to forge an emotional bond with printing and PCs, no easy ask for a mobile-first Snap-happy generation.

“From a marketing standpoint … we needed to change several things,” says Lucio. “We were not talking to millennials,” who he characterizes as the IT decision makers: “We want them to print.”

“Everything that we do in terms of placements or sponsorships or partnerships, you need to do three things: It has to be relevant to a target, have a reinvention component, and provide the tech to empower an experience,” says Lucio.

For HP, that means, says Lucio, “we’re moving from the information age, which was everything about devices, to the experience age, where everyone is expecting seamless, curated hyper relevant personalized experiences, where you flow from the digital world to the physical world and back into the digital world is completely seamless and completely tailored to you.”

In our conversation, Lucio also shares a little of his own personal journey—how his childhood in Spain and Puerto Rico shaped who he is today, and why a diagnosis of depression helped to change him for the better.

An encounter with a former pollster for Tony Blair, of all people, helped him reorient his priorities, he says. He credits Philip Gould with teaching him that if you’re a wired, high-flying businessman 24/7, a rift opens up between the spiritual self—the person you want to become—and the material self, the person you are day to day.

“It is only by living a life with purpose—and finding purpose in your life—that you bring those two selves [together], they become one, that you find meaning in work and family,” he says. “That sometimes means you have to make tough choices. When you are in a place that doesn’t allow you to live that purpose, you have to leave that place. And when you are with people who don’t allow you to live your purpose, you have to leave those people.”

And what was HP's response to its ad agencies missing the mark on hiring people of color?

Not so much as a gentle swat on the hand.

Just a shrug of the shoulders and a "Oh, they didn't do as well as we hoped."

So why exactly would any of HP's ad agencies step up and hire POC at this stage? There's no incentive, and no price to be paid if they don't.

By the way, I've dealt with HP's agencies and let me tell you, foreigners on visas have no clue how American culture works. Just because someone has a foreign name doesn't instantly make them a person of color, HP, no matter how much your agencies are trying to pass them off as "multicultural experts."

Those white South Americans and Europeans, and BAMEs from the UK, are struggling just as much as plain old white people in America to understand POC culture here, and importing them onto US soil doesn't automatically make HP or its agencies "woke." If anything, it puts HP at risk because they're going to screw something up, I can tell by how culturally clueless they're acting.