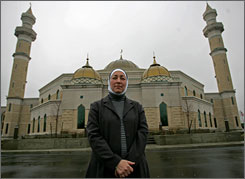 DEARBORN, Mich. — The Arab Muslims who came here eight decades ago to work on Henry Ford’s new assembly line believed their American future was limitless. But after five years on the home front in America’s war on terrorism, many of their descendants are hunkering down, covering up and staying put.

In this and similar enclaves, like those in northern New Jersey and Brooklyn, many Arab Muslims say their community is turning in on itself — shying away from a society increasingly inclined to equate Islam with terrorism.

“It’s as bad as after 9/11,” says Rana Abbas-Chami of the Michigan American Arab Anti-Discrimination Committee. “A lot of people are scared. They’ve changed how they do things.”

Some stay put. They don’t like to fly, cross the border with Canada or shop at malls outside the city. “It’s a feeling that if you go too far outside Dearborn, anything can happen,” says Osama Siblani, a local newspaper publisher.

Some blend in. They Anglicize their names (Osama Nimer, electrician, is now Samuel Nimer) or change them (Mohammad Bazzi, nurse, is Alex Goldsmith). They trim their beards. In public, they speak English instead of Arabic. They display the flag. They wear the Tigers cap.

Some lie low. They won’t contribute to a Muslim charity, at least not by check, and not if it works overseas. They watch what they say, especially on the phone. They think twice before trying to rent a truck, get a hunting license or take a flying lesson.

Some regard Dearborn, center of the nation’s largest Arab Muslim community, as an island of security; others see it as a potential trap.

[Click on the essay title above to read the full story.]
Posted by HighJive at 10:27 PM