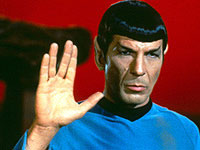 • An insurance company refused to deal with 50 Cent for a $10 million lawsuit filed against him, saying the rapper failed to inform them of the action for over a year, thereby voiding his coverage. The lawsuit charges Fiddy’s G-Unit crew started a brawl during a radio station interview in Washington, D.C., last year. A DJ apparently dissed a posse member who was wearing a wireless headset by flashing the Star Trek Mr. Spock salute and saying, “Greetings, my Vulcan brother.” The suing DJ claims he was then beaten up. If you mess with G-Unit, don’t expect to live long and prosper.

• American Greetings released a card that pokes fun at poverty in Cleveland. It presents a black-and-white urban scene with the headline, “Season’s Greetings from Cleveland … America’s Poorest City!” A spokesperson said, “Obviously, our intent is not to make light of the issue [that the U.S. Census Bureau determined Cleveland is the nation’s poorest big city]. It’s just a satirical form of humor that plays well with a certain segment of the population. … We realize it’s not for everyone.” Maybe the card company should change its name to American Elitist Greetings.

• Oprah Winfrey is getting into reality TV with two ABC programs tentatively titled, “The Big Give” and “Your Money or Your Life.” According to the ABC Entertainment President, the shows focus on “wish fulfillment and making lives better.” Should be big hits in Cleveland.

• Move over, Taco Bell. Now the Olive Garden reports over 300 diners fell ill after visiting the Italian eatery. The company’s ad slogan is “When you’re here, you’re family.” Hope customers have family plan insurance coverage.
Posted by HighJive at 11:42 AM