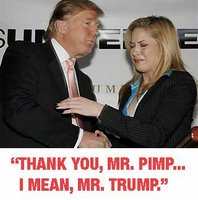 Rosie O’Donnell and Donald Trump continue to battle, with O’Donnell posting the following on her blog:

Trump fired back with the following gems:

“Well, it’s too bad. … I think she’s got something wrong with her. I think she’s cracking up. … Rosie is basically a very untalented person who’s a bully. Her intelligence is less than average in my opinion. … Can you imagine the parents of Kelli [O’Donnell’s partner] … when she said, ‘Mom, Dad, I just fell in love with a big, fat pig named Rosie’? Can you imagine the expression on their face? … She calls me a pimp just because I helped someone who was in trouble. … Rosie got mentally beaten up by me because she’s a mental midget, a low-life. I think she’s got a death wish.”

Wow, Trump is starting to sound like the worst kind of pimp. And the “death wish” comment borders on a legitimate threat.

Has anyone else thought that the next version of “The Apprentice” should pit pimps against prostitutes?

Both of these fools appear to be taking advice from Michael Richards and Mel Gibson.
Posted by HighJive at 6:51 PM

Has anyone pointed out that the pageant has standards of conduct that go with the title (like a sports promotion contract) and that Rosie attacking Donald personally was way out of line? For this reason alone I can't argue with Donald's statements but can argue with Rosie's. She opened her pie hole when she shouldn't have and attacked a man personally for professional behavior we should all endorse.