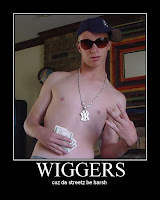 A contrived video made by Crispin Porter + Bogusky interns sparked a fair amount of Web chatter last week. Most commentators questioned the overall lameness of the concept, while the always useless Agency Spy staged the stereotypical volley of accusations of racism countered by probable racists insisting the offended were PC Police. Whatever.

Here are a few tardy quips from MultiCultClassics:

• Is the video racist? Depends upon one’s personal definition of racist. A better label might be culturally clueless. CP+B is hardly a stranger to wearing that tag, as the shop has received consistent and recent gripes for insensitive work including campaigns for Burger King and Old Navy.

• Is CP+B racist? Again, it depends upon one’s personal definition of racist. MultiCultClassics kinda remembers the shop was publicly called racist many years ago while still headquartered in Miami. A trade journal—likely Adweek or Ad Age—published the charges. Fuzzy recollections include a CP+B defender declaring the statements were ludicrous because Alex Bogusky was/is married to a Latina—as if that would absolve the agency. Should anyone find a copy of the piece, or even have a memory of it, please drop a note. Regardless, CP+B has historically displayed its trademark arrogance by nonchalantly brushing off all culture critics.

• Is this video another example of racism in the industry? Tough to tell. Given that it was not really intended for mass viewing, the intern invention doesn’t quite reach the offensive heights of, say, commercials hatched by Draftfcb or Omnicom. Indeed, it’s virtually identical to self-promotional shit expelled from a local-level agency, and hardly something to be coming from the allegedly creative powerhouse CP+B. Hey, if you’re gonna steal someone else’s culturally clueless idea, wouldn’t it be better to copy an agency like TBWA\Chiat\Day?

• What would Dan Wieden think of the video? Pardon the sloppy segue, but this scenario certainly ties to the infamous remarks Wieden delivered at the 2009 4As Leadership Conference. As a creative director and social observer, Wieden would have to look at the musical production and holler, “Now that’s fucked up!” Then he’d recommend that CP+B initiate an outreach program for inner-city youth in Colorado. The iconic adman admitted that he and the industry are prone to “…essentially hire a bunch of White, middle-class kids, pay them enormous, enormous sums of money to do what? To create messages to the inner-city kids who create the culture the White kids are trying like hell to emulate.” CP+B’s resident wiggers broadcasted semi-proof of Wieden’s words, although the interns are not being paid enormous, enormous sums of money. Given that Wieden and other ad legends have spoken out on the lack of diversity in our ranks, maybe it’s time to hear from Alex Bogusky. Then again, maybe not.
Posted by HighJive at 12:02 AM

When I saw this video all i could think is "Yup... those are ad industry interns."

I wasn't offended as much as I was just tired.

I don't think they were intentionally mocking black folks or hiphop--i think it was that tired "hey i'm a white kid who likes urban culture—get it! I'm cool!" combined with a cluelessness about how gawdawfully homogenized and untalented they are. [Even spoofs require talent--see Weird Al/Andy Samberg, etc.]