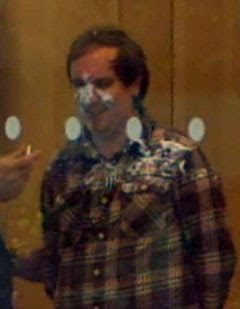 The New York Daily News reported Jonnie Marbles, the guy who tried to hit Rupert Murdoch with a shaving cream pie, is bragging about his thwarted deed. “Simply put, I did it for all the people who couldn’t,” declared the pie protestor. Yo, dude, you got bitch-slapped by Murdoch’s wife—and it’s all gone viral.

The comedian/activist who attacked Rupert Murdoch says he did it for all the people who wish they could shove a cream pie in the powerful plutocrat’s puss.

“Simply put, I did it for all the people who couldn’t,” wrote Jonathan May-Bowles, aka Jonnie Marbles.

May-Bowles, 26, who was arrested for disrupting Tuesday’s Parliamentary questioning of Murdoch, was bailed out Wednesday.

Though fellow Murdoch critics complain that he derailed the much-awaited confrontation, May-Bowles said he pulled the stunt to expose the hearing as a sham.

“(The) select committee hearing was a farce before the foam ever left my fingers: a toothless panel confronting men too slippery to be caught between their gums.”
Posted by HighJive at 9:35 AM