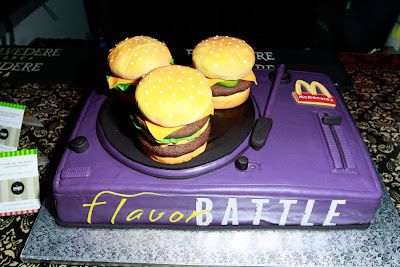 MediaPost News reported Mickey D’s has selected the finalists for its Flavor Battle national DJ competition. Gee, what a breakthrough idea. The folks behind the promotion were probably debating between staging a contest between DJs, gospel choirs, stepping enthusiasts, spoken word artists, breakdancers or marching bands. Look for the winner to appear in a Chicken McNuggets® commercial.

McDonald’s has announced the finalists in its Flavor Battle, a national disc jockey (DJ) competition featuring some of America’s hottest up-and-coming mix-masters.

DJ Arty J of St. Louis, Mo., DJ Element of Brooklyn, N.Y. and DJ Jena Red of Pasadena, Calif. beat 21 other DJs from across the nation and advanced to the final round of the competition.

The finalists will now scratch, mix and battle live in Miami on Feb. 7 before a panel of celebrity judges and crowd of young, hip audiophiles for a $10,000 grand prize and bragging rights as the 2013 Flavor Battle champion.

DJ Arty J, DJ Element and DJ Jena Red garnered the most votes in the online competition in which thousands of music and burger lovers from across the nation listened to a custom music mix from each DJ on FlavorBattle.com and voted daily for their favorite flavor master in each region.

Sprite Spin-Off is a new addition to this year’s competition. Fifteen DJs who garnered a high number of votes, but did not advance to the final round, received a second shot at winning a trip to Miami. DJ Kue of St. Louis, Mo. climbed his way to the top of the Sprite Spin-Off and will spin during the finale’s exclusive pre-event party.

“McDonald’s Flavor Battle gives some of the most creative, emerging DJs a national platform to showcase their skillful talent and connect with audiences through a universal vehicle—music,” said Rob Jackson, McDonald’s U.S. marketing director, in a release. “Music is an integral part of culture and communities, and as a brand, we’re proud to continue supporting a program that shines a spotlight on the unparalleled art form of deejaying.”

Conducted with men’s style and lifestyle network Complex Media, Flavor Battle launched in 2009 as an extension of McDonald’s 365Black initiative. McDonald’s 365Black platform was created to celebrate the pride, heritage and achievements of African-Americans year round.