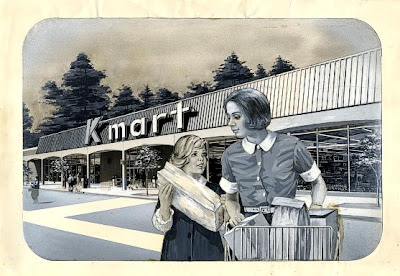 Adweek reported Kmart is keeping Draftfcb as its creative AOR after a lengthy review. The shitout shootout included McCann (a sister IPG shop) and mcgarrybowen—staging a veritable battle of shitty agencies vying for a shitty client. Given that a huge number of Kmart shoppers are minorities, was a minority agency even considered in the pitch? Meanwhile, sharks should be very afraid.

As with media review, incumbent wins

Draftfcb has retained its lead as creative agency for Kmart after a protracted review that kicked off in January.

In the end, the agency bested corporate Interpublic sibling McCann Erickson and Dentsu’s mcgarrybowen, the lead agency for Sears—which like Kmart is owned by Sears Holdings.

In the creative review, final presentations were held at Kmart headquarters in Hoffman Estates, Ill., in the first week of April, and a decision was expected shortly thereafter. Review participants were informed of Kmart’s decision to stay with Draftfcb at the end of last week.

What may have helped Draftfcb in its bid to hold onto the account, which it has had since 2007, has been funny recent work like “Ship My Pants,” which has created a lot of buzz and captured 19.3 million views on YouTube since its release in April. That momentum was further fueled by a follow-up spot, “Big Gas Savings.”

Draftfcb referred inquiries to Sears Holdings which has yet to respond to Adweek inquiries.

While Draftfcb’s recent Kmart work has received a lot of media attention, it’s not clear how that will translate into sales results. For the first quarter, domestic comparable Kmart store sales dropped 4.6 percent which reflects decreases in most categories, with the largest declines occurring in grocery and household, pharmacy and drugstore, Sears Holdings said in May. (At Sears, same-store sales were off 2.4 percent in that period.)