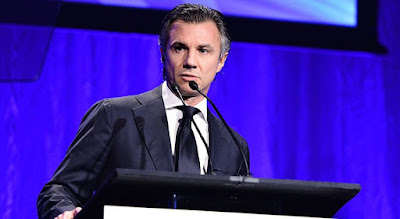 Adweek reported on the dubious progress revealed by Verizon CMO Diego Scotti, who had mimicked HP CMO Antonio Lucio’s request for White advertising agencies to primarily promote White women and secondarily consider colored people. Sure enough, the fuzzy figures exposed by Scotti showed a big boost for White women and questionable results for people of color. When asked why he didn’t force quotas on his White ad shops, Scotti explained, “We don’t really believe in quotas, we believe in progress.” Okay, but how does one measure—and ultimately judge—progress if specific numbers aren’t applied to the equation? Scotti then segued to hyping his company’s latest diversity scheme, which involves an internship program for colored college students. Wow, that’s original. When discussing diversity, Scotti admitted, “This is not an easy thing to solve, so for me I never expected to have crazy results quickly, but I learned a few things that are important.” Whatever. But everyone should learn one thing that is important: High-tech companies like Verizon and HP are diversity dinosaurs—and these companies have maxed their quotas for conspiring with White advertising agencies.

One Year After Calling on Agency Partners to Be More Diverse, Verizon CMO Shares the Results

One year ago, Verizon CMO Diego Scotti sent a letter to all of the brand’s agency partners. In that letter, Scotti called on each of the 11 agencies on the Verizon roster to focus on improving the number of women and people of color working for them.

Scotti’s letter came around the same time that HP and General Mills put out similar demands, laying out quotas for their agency partners to reach. Verizon didn’t ask for agencies to meet a certain quota because as Scotti explained, “we don’t really believe in quotas, we believe in progress.” Instead he asked that all of the agencies share the current state of their workforce 30 days after the letter was sent out and deliver an action plan to improve upon those numbers in the future.

“Now we meet every quarter with all the agencies together, and everybody needs to report their progress in front of everybody else, which in and of itself is changing the dynamic of how we are having this conversation,” Scotti explained. It holds everyone accountable.

Now one year after making that call to action, Scotti shared how both Verizon and its partners are doing on the diversity and gender front.

At the agencies, 31 percent of employees at the leadership level are people of color, up nine percent from last year. Eleven percent of those in leadership positions are hispanic, up 5 percent; 51 percent are female, up 3 percent.

“This is not an easy thing to solve, so for me I never expected to have crazy results quickly, but I learned a few things that are important,” Scotti said. One of those important lessons Scotti learned came from starting an in-house agency that launched in February.

There are already 70 people working on Verizon’s in-house team and the staff is split, 50 percent white and 50 percent people of color. Additionally, 52 percent of the staff is female and 48 percent is male.

“The number one lesson is when you build something from scratch and you put the filter of diversity in it, you can do it,” he said. “If you create the right environment, then you can do it.”

Looking specifically at new hires, 210 employees have been hired in the past year to work on the Verizon account across agencies; 41 percent of the hires were people of color and 53 percent were women.

Creating an in-house agency and focusing on improving agency and internal diversity numbers was the first prong in Scotti’s diversity-focused approach for Verizon. Another prong is the Ad Fellows program, which officially kicks off today.

The Ad Fellows program selects 20 college graduates from across the country, all with diverse backgrounds, to participate in an eight-month fellowship program. Scotti hopes that at the end of the program, 90 percent of the fellows will score full-time jobs at one of the six companies participating in Ad Fellows.

What makes Ad Fellows different than your typical fellowship, though, is that Verizon tapped five of its agency partners—McCann, Momentum, Rauxa, Zenith and Weber Shandwick—to participate in the program.

Over the course of eight months, the 20 fellows will be split into smaller groups and rotate between Verizon and a handful of the participating agencies (which cover creative, media and PR). That way the recent graduates have a chance to explore different parts of the marketing and advertising business and find out what it is they want to do with their career and what parts of the business they excel in.

The program is fully paid and covers housing and expenses for all 20 fellows to ensure that people of all backgrounds can have the chance to participate.

While the program just kicked off today, Scotti already has big plans for its future. Outside of holding more cycles each year, Scotti hopes that the idea of an Ad Fellows program can extend beyond Verizon. He hopes one day that, “every company in America has an Ad Fellows program and they gather agencies to work with them. I would love to partner with the ANA or The Ad Club or some organization that could help bring other clients to partner with the ad agencies and make it a really big thing.”

I have intimate knowledge of this account, so I can tell you this diversity thing is all smoke and mirrors.

None of the agencies are taking it seriously, they haven't diversified anything, and Verizon hasn't held their feet to the flames in any way at all.

They reason Verizon can't release specific numbers is because the only "improvements" were the agencies adding and promoting white women, period, end of discussion.