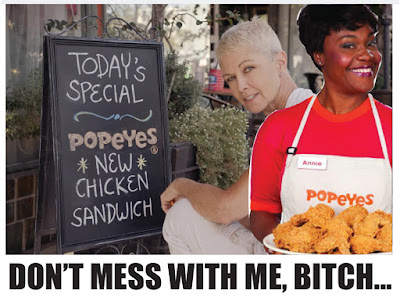 Advertising Age reported on Sweet Dixie Kitchen, a California restaurant that launched a sandwich for Popeyes with advertising starring Kim Sanchez, the eatery’s owner. Annie the Chicken Queen must feel dissed and pissed over the blatant slight.

Popeyes launches sandwich at the restaurant that secretly resold its chicken

Popeyes is heading to a local California restaurant that famously re-sold its fried chicken to launch its first national chicken sandwich.

Popeyes is promoting the sandwich’s debut by visiting the scene of what might be called a culinary crime. Sweet Dixie Kitchen, a restaurant in Long Beach, California, came under fire a couple of years ago after locals discovered the restaurant used Popeyes chicken in its chicken and waffles dish. The matter blew up on the Internet well beyond Long Beach after a local reporter wrote about it in an October 2017 story for the Long Beach Post.

Now, Popeyes is hoping the public’s memory of the event—which, lest you’ve forgotten, was dubbed #popeyesgate—won’t deter people from wanting to try the chain’s first national chicken sandwich.

Popeyes got Kim Sanchez, the Sweet Dixie Kitchen owner who bought and re-sold Popeyes chicken, to star in a video about the launch.

The creative campaign comes from Gut, the agency started by Anselmo Ramos and Gastón Bigio, who were previously two co-founders of David. It’s the first work from Gut for the Popeyes brand.

Popeyes describes the sandwich as a buttermilk battered and breaded white meat chicken filet, served on a buttery, toasted brioche bun with two “barrel cured” pickles and classic mayo or spicy Cajun spread. The sandwich is hitting the Popeyes menu with a suggested price of $3.99.

The new product, which Popeyes called its biggest launch in 30 years, shows how the chain is trying to win over fans of market leader Chick-fil-A and other chicken-focused rivals including KFC.

But first, there’s the promotion with Sweet Dixie Kitchen.

“To be honest, I thought they were calling to sue me,” Sanchez said in a statement provided by Popeyes. “We have a long history with Popeyes, but we’ve always said Popeyes chicken is the best fried chicken we ever had.”

On Aug. 8 and 9, the sandwich will first be available at her restaurant, before hitting Popeyes locations on Aug. 12.

Brian Addison, who wrote the Long Beach Post story about Sweet Dixie’s use of Popeyes chicken in 2017, reported this week that Sweet Dixie Kitchen is closing. The closure isn’t addressed by Sanchez in the video.

Popeyes, meanwhile, is growing under the ownership of Restaurant Brands International, which bought the chain in 2017 and also owns Burger King and Tim Hortons. Restaurant Brands said last week that Popeyes’ second-quarter same-store sales rose 2.9 percent in the United States and 3.7 percent in international markets. It recently announced plans to open 1,500 Popeyes in China during the next decade and is planning to open Popeyes locations in Spain.