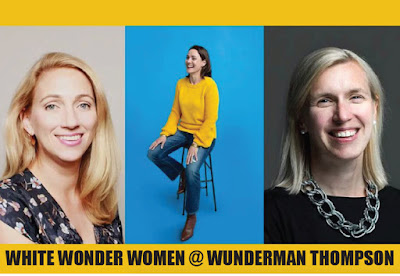 Advertising Age reported on more Wunderman Thompson management shits shifts that accelerated the White women’s bandwagon in the process. It seems like only a short time ago that the White advertising agency was anti-female with its toxic sexual harassment and worst-in-class gender pay gaps. Oh, it was only a short time ago. Now White women are being given the opportunity to create multi-layered management hierarchies that are every bit as dinosaur-like and dysfunctional as the fucked-up organizational charts crafted by White men. Lester Wunderman and the Commodore would be proud. You go, girls!

“Melissa, Liz and Carrie are hands down some of the best and brightest minds in the industry,” Wunderman Thompson North America CEO Shane Atchison said in a statement. “Each of them will be a key part of Wunderman Thompson's success going forward—I can’t wait to see their impact on our business.”

Dorko will be responsible for new business outreach and development. Before Isobar, Dorko was vice president of North American business development for Sapient Razorfish (now part of Publicis Sapient).

In addition to continuing leading Swift as CEO, Valentine will be given oversight of the strategic vision, growth, operations and client relations of Wunderman Thompson’s California, Seattle and Denver offices.

At Huge Atlanta, Philpott is credited with driving business growth for clients such as Turner Sports, Lowe's Home Improvement, UPS, PGA of America and CNN.

Is 2050 the predicted year for POC to finally get some promotions? Are we just supposed to pretend a wall of white women = diversity until then?

But what is your boule black leadership doing? Besides the bootcamps and 10 week college internships? What is Adcolor doing? What are your bootcamp & diversity officers doing? Are your creative leaders (Geoff Edwards, Jayanta Jenkins and Jimmy Smith)are these men demanding change? Where are your inclusion and culture officers, Renatta McCanns, Douglas Melvilles, Tiffany Warrens ?

They sold you out, just like the democrats. None of these "initiatives" have made any significant change in the advertising industry. In fact the number of black talent is less than it was in the early 2000s.