14789: In Adland, Ageism Is The New Reverse Discrimination. 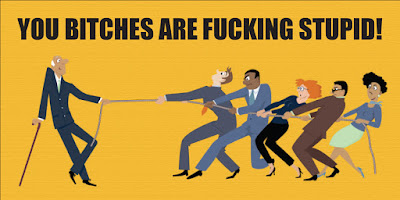 AgencySpy posted on another ex-CCO suing his former employer, although this scenario involves a White man charging ageism—in contrast to the bulging number of White men being charged with sexual misconduct. The main similarity is the CCO’s decision to try his case in the court of public opinion. Given that most firings involve signing a confidentiality release form, it’s funny to witness individuals seemingly violate such agreements by openly sharing the legal details of their grievances. It’s also funny to watch White men—most of whom have done little for diversity and equality throughout their careers—suddenly embrace the role of discrimination victim. In this particular instance, the CCO displayed his court filing via LinkedIn and asked people to submit their own tales of alleged ageism. All of which leads to a funnier situation; that is, someone spending decades in a field driven by exclusivity, buddy systems, politics and cronyism ultimately feels grossly wronged upon being bounced from the White Boys’ Club.

Where was the revolutionary spirit when the truly underrepresented needed boldness and bravery from leaders?

Epsilon and its former CCO are at odds over whether the agency had sufficient cause for firing him.

John Immesoete filed the lawsuit in U.S. District Court for the Northern District of Illinois, Eastern Division, on Aug. 5, alleging age discrimination, defamation per se and false light. Also named in the lawsuit are Richard McDonald, president of Epsilon’s agency practice, and svp and chief client officer Sandy Kolkey. Immesoete alleges McDonald and Kolkey made false statements regarding his conduct in an attempt to justify his termination, according to the complaint.

McDonald and Kolkey have yet to respond to requests for comment sent via email and LinkedIn.

Epsilon informed Immesoete he was being fired for cause on Nov. 29, according to the complaint. The complaint does not identify the stated cause, but according to Immesoete’s complaint, the 54-year-old believes the company wanted to replace him with a younger creative lead. He shared the legal complaint in a LinkedIn post on Monday.

“We strongly dispute the allegations included in John Immesoete’s public LinkedIn post,” an Epsilon spokesperson said in a statement provided to Adweek. “As a matter of policy, we have no further comment on the pending litigation.”

Immesoete characterized the allegations outlined in his complaint as part of a broader pattern of ageism in the advertising industry.

“These fights are difficult, and I know why a lot of people don’t do them, having lived through it,” Immesoete told Adweek. “You work for a company for a long time, and you give your all, and then there comes a moment in time [when] they just throw you away like a piece of garbage. That isn’t right, and a lot of people aren’t in a position to even fight that.”

He added that tech companies like Epsilon put an even greater focus on presenting a youthful appearance than most ad agencies do. His November dismissal preceded Publicis Groupe’s decision to acquire Epsilon in April of 2019.

A Publicis spokesperson said the company would not make a statement beyond the one Epsilon provided to Adweek.

In the complaint, Immesoete says his problems with McDonald date back to when he was being considered for the president role—he claims McDonald made comments critical of Immesoete’s age, both in person and to other people.

According to the complaint, Epsilon’s decision to fire Immesoete followed a series of events that began when he wasn’t informed of a meeting with the CMO of a global healthcare company, the agency’s largest client. Immesoete alleges this was part of a pattern of exclusion and diminished duties under McDonald.

When Immesoete complained about his absence from the client meeting, he alleges, vice president for human resources Ellen Evans told him not to make a big deal about it at a time when Epsilon was in the process of being sold. According to the complaint, Evans asked Immesoete, “Having been through so many agency presidents now, have you thought about moving on?” (McDonald was the sixth president at Epsilon during Immesoete’s tenure with the agency.)

Evans has not yet responded to requests for comment sent via email and LinkedIn.

Immesoete alleges in the complaint that McDonald used this animosity between the chief creative and account director and Immesoete’s conduct in the meeting as a pretext to fire him, subsequently telling Immesoete not to come into the office and calling a special meeting of the team that had been in the meeting in question.

According to the complaint, McDonald and Kolkey called Immesoete’s conduct in the “huddle” meeting “inexcusable,” and McDonald allegedly told Immesoete’s assistant later that day that he would be fired and that “your boss said [the account supervisor] was stupid and everything she said and did was fucking stupid.”

Immesoete alleges he has an audio recording provided to him by an anonymous source that contradicts this and subsequent characterizations of his statements in the meeting made by McDonald, Kolkey and others. Whether such a recording can be submitted as evidence may come into question, as Illinois is an “all party consent” state and it’s not clear from the complaint if all parties were aware that they were being recorded.

McDonald informed the agency that Immesoete would be placed on administrative leave, which the complaint characterizes as a “never-previously-used status that painted him as a safety risk and accelerated the rumor mill.”

During the process of being placed on leave, according to the complaint, Immesoete claims he was not allowed in Epsilon’s offices, access to his agency email was cut off and he was warned not to speak to anyone about the details of his administrative leave since he had signed a confidentiality agreement. Epsilon then launched a monthlong investigation the complaint characterizes as a “sham investigation” that concluded with Immesoete’s firing, according to the complaint.

McDonald allegedly sent an agency-wide email that read, “John Immesoete will no longer be with the company,” which the complaint claims was “designed to encourage speculation that Mr. Immesoete was a predator.”

According to the complaint, McDonald informed Epsilon employees not to post anything supportive of Immesoete on social media “because your loyalty to the company could be questioned,” adding, “If you have posted anything, take it down.”

McDonald is also alleged to have told employees not to share with Immesoete any materials he worked on at the agency, preventing him from using anything created during his six and a half years at Epsilon in his portfolio.

The lawsuit claims that “false statements” by McDonald and Kolkey “were made with actual malice” with intent to harm Immesoete or “reckless disregard of his rights.”

It goes on to claim that those statements in conjunction with the agency’s limited internal and external communications regarding Immesoete’s employment status at Epsilon were designed to “convey a false impression about Mr. Immesoete, inside Epsilon and in the advertising community.”

Immesoete is seeking back pay, including benefits and bonuses for the alleged age discrimination against him, front pay as determined by the court, liquidated damages, attorney fees, prejudgment interest and costs. The complaint estimated the value of his salary, annual bonus, benefits and share awards at around $800,000.

Epsilon does not appear to have hired a CCO following Immesoete’s departure. The Epsilon agency practice’s website instead lists three svp, executive creative directors as the highest-ranking creatives at the agency.

I'd love to see someone confront all of these white "ageism is the worst -ism"ers in person and asked them why they never lifted a finger to help anybody black or brown in a real way (as judging by the lack of them in higher positions in our industry), but NOW, late in the game, want to jump onboard the diversity bandwagon when it only benefits themselves.

Hiring old people certainly won't help old POC, the white people crying ageism now are the ones who made sure they never got to get a toehold in advertising in the first place.