14799: Joe Alexander Wants Truth In Advertising—Ups The Ante By $50 Million. 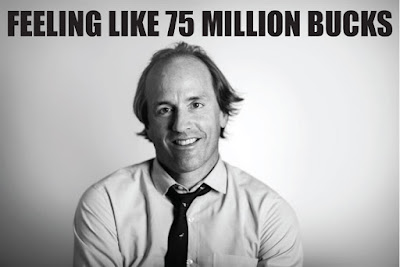 Advertising Age reported Joe Alexander filed a $50 million lawsuit against The Martin Agency and IPG, complementing the $25 million lawsuit targeting Diet Madison Avenue and Adweek. The Martin Agency is probably checking if GEICO offers insurance to cover legal disputes. Alexander presented plenty of comedy, including dramatic prose in his court complaint and statement to Ad Age. Equally hilarious was counter-commentary from Kristen Cavallo that read: “It’s never been about Joe or #metoo for us. Karen [Costello, chief creative officer,] and I are the leaders of ‘what came next.’ Our actions are a reflection of our values, not a reaction to the past. We can have transparency, wage equality, extended parental leave, a true commitment to a diverse workforce, while creating work our clients prosper from, people talk about and our employees are proud of. Our focus is on the future and the agency’s progress.” Fortunately for Cavallo, she isn’t required to prove her puffery. Such bullshit clearly qualifies as a divertisement. Meanwhile, Alexander is seeking a jury trial, likely in order to call the GEICO Gecko and Caveman as character witnesses.

Former Martin Agency creative chief Joe Alexander made good on his promise to file against Interpublic Group of Cos. today. It’s not exactly your average lawsuit.

The complaint, filed in the Circuit Court of the city of Richmond, Virginia, seeks $50.4 million dollars in damages and opens with an image of “The Death of Lucretia,” the circa-1760s painting by Scottish neoclassicist Gavin Hamilton.

After the opening question, “Et tu, Martin?” It reads, “This is a case about extreme betrayal, deception and disloyalty,” and names his former agency, its CEO Kristen Cavallo, former VP and associate creative director Sissy Estes, attorney Tara Hanley of Dallas law firm Mark and Hanley and holding company IPG as defendants.

Alexander left The Martin Agency in December 2017 after the shop reportedly conducted an internal investigation into sexual harassment allegations following posts that had appeared on Diet Madison Avenue—though the agency only responded indirectly to Ad Age when asked if it had conducted such an investigation.

The new complaint lists Alexander’s various contributions and accomplishments during his tenure at the agency, including awards show accolades and industry citations. Those include business and creative successes for brands such as Geico, Oreo, Donate Life, JFK Library and more. There are photos showing him with the Martin team accepting Clios and an Emmy. It cites his salary in 2016 as $1,071,856.83.

The suit alleges that Martin “robbed” Alexander “of his entire life’s work, destroyed his name and reputation, and permanently impaired his ability to find employment in the advertising industry.” It charges that the agency did so by secretly leaking to anonymous social media account Diet Madison Avenue the terms of a confidential settlement agreement between Alexander and the agency along with confidential human resources files, and claims that the agency “represented to DMA that Joe had sexually harassed Martin employees.” The suit states that such allegations were “completely false.”

In further details listed in the complaint, Alexander claims that along with its release of the aforementioned confidential settlement details in the fall of 2017, defendant “Estes or another former employee falsely stated to DMA that in ‘Joe Alexander’s case, there was a slush fund created just for him internally at Martin’ to deal with Joe’s ‘crap’ — a ‘slush fund’ that was hidden from [IPG Chairman-CEO] ‘Michael Roth and IPG.’” The suit identifies Estes as an art director on Walmart who was laid off in 2011 and, the suit claims, “publicly bragged about bringing Joe down” by collaborating with DMA and the media.

The suit goes on to claim that “the suggestion that Roth and IPG were unaware” of the confidential settlement is “patently false,” noting that financial statements of both holding company and agency are consolidated and audited, so a settlement check could not have been concealed from what it calls “IPG’s crack team of accountants and auditors.”

It further claims that the agency and DMA exchanged “numerous false and defamatory statements” about Alexander via Instagram messenger and “wrongly accused Joe of sexual harassment and labeled him a predator.”

The complaint also alleges that IPG had ordered the Martin Agency to terminate Alexander after it had learned the agency had “breached fiduciary duties” and that the agency disclosed confidential employee information to DMA—information which, along with “false accusations,” it claims, were published by DMA.

The suit says that IPG’s reported investigation into claims of harassment by Alexander was only done as a “cover-up” of Martin’s breaches with regard to the confidential settlement agreement, purporting that Alexander’s termination by IPG was a means to shift the spotlight away from the company and prevent DMA from looking into a cover-up of harassment by c-suite execs.

The suit identifies defendant Hanley as an attorney for former Martin employee Robin Bidwell, who the suit claims “alleged (falsely) that she had been sexually harrassed.” The complaint says that Alexander denied wrongdoing and the matter was settled without liability in 2013 in a confidential agreement, which it claims was later leaked to the press.

“It’s never been about Joe or #metoo for us. Karen [Costello, chief creative officer,] and I are the leaders of ‘what came next,’” said Martin Agency CEO Kristen Cavallo in a comment provided to Ad Age. “Our actions are a reflection of our values, not a reaction to the past. We can have transparency, wage equality, extended parental leave, a true commitment to a diverse workforce, while creating work our clients prosper from, people talk about and our employees are proud of. Our focus is on the future and the agency’s progress.”

“This claim is without merit, not to mention contrary to Joe Alexander’s signed agreement with our company and written apologies,” IPG said in a statement to Ad Age. “We stand by our actions and will defend our position, and pursue all applicable counterclaims, vigorously.”

When asked for comment about the suit, Alexander released a statement to Ad Age that reads in full:

I believed. I believed in The Martin Agency. I believed in what they stood for. A company that created big, business changing ideas. A place where hard work was rewarded. Where everyone had a voice at the table. I believed in the talent and pushed my teams to achieve like never before. I believed in the culture so much, I personally recruited dozens of creatives and their families from all over the world to join us. I believed in the people. They were more than coworkers. They were close friends. Confidants. Even godparents. I believed them when they said ‘Trust me.’ ‘You’re my partner.’ ‘We have your back.’ I kept believing in The Martin Agency when it all ended in 2017 after 26 years. ‘We will work it out.’ ‘I want you to have everything so you can make an informed decision.’ ‘We’re here for you.’ A year passed, then 18 months, then almost 2 years. I continued to believe the story they gave me and spread in the press and on panels at Cannes. I took it hook, line and sinker, even to the point I began to apologize and take blame. Until, one day this summer, I stopped believing. They said ‘Never let a good crisis go to waste.’ And I began to discover The Martin Agency lied to me. They betrayed me. They left me for dead. They used my loss for their gain. Yes, I still believe. But I believe in something much bigger. The Truth. And I’m going to fight until The Truth is out there for everyone else to see. And believe.