14621: Benefiting From And Taking Advantage Of A Bone-Crushing Crisis. 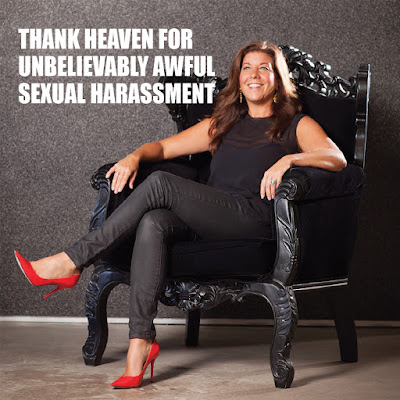 Advertising Age reported The Martin Agency CEO Kristen Cavallo declared “she hopes every company experiences ‘a bone-crushing crisis,’ because ‘you won’t show the courage to change’ without it.” Does that mean Cavallo must have her bones crushed before she’ll make good on her “We’re on it” pledge for true diversity? Cavallo’s admission is pathetic when considering the number of women allegedly abused for decades at The Martin Agency. Sorry, but that kind of institutionalized insanity doesn’t qualify as a crisis—rather, it’s a cultural cancer. For Cavallo to recognize that “the really sad part of this whole thing is that none of what we did required a crisis” underscores the unconscionable lack of ethics and integrity at her White advertising agency. After all, the late Mike Hughes confessed, “We’ve done a pretty poor job on diversity as an industry and we’ve got to do better.” Yet Cavallo has done no better than Hughes—despite the fact that both live/lived in a region where Blacks comprise over 50% of the population. Sorry, but folks like Cavallo put the “Me” in MeToo.

The Martin Agency CEO Kristen Cavallo says she hopes every company experiences “a bone-crushing crisis,” because “you won’t show the courage to change” without it.

Speaking on a panel at VentureFuel’s first Rogue Women event on Tuesday, Cavallo spoke openly about taking the helm of the Interpublic Group of Cos. agency following the high-profile ouster of former Chief Creative Officer Joe Alexander in late 2017 due to sexual harassment claims made against him.

“I should start by saying I never had the ambition to be a CEO,” Cavallo told the audience. “I actually aspired to be No. 2. I rationalized it to myself like a chessboard. I thought the king on a chessboard can only move one square at a time. The queen can go in every direction, as many squares as she wants. So I thought that’s my goal.”

She continued, “But I got the top job, I’m not going to lie, because I’m a woman who lived in the city, who enabled them to change a narrative overnight and I’m upfront and honest about that.”

Cavallo was U.S. chief strategy and growth officer for MullenLowe before becoming the first female CEO of Richmond Virginia-based The Martin Agency. Under her direction, she appointed the first female chief creative officer, Kristen Costello. Cavallo doubled the number of female executives on The Martin Agency’s board. She added the first person of color to the executive team. She closed the wage gap. She tripled the agency’s paternity leave.

“The fun part of taking over a branding crisis, which is really not fun, is you have permission to burn lots of bridges,” said Cavallo, who was also recently named Ad Age’s Executive of the Year. “We did probably 75 things last year. We just burned everything. And the really sad part of this whole thing is that none of what we did required a crisis.”

Melanie Strong, VP and general manager of Nike’s global skateboarding division, speaking on the same panel as Cavallo, said that she “woke up on January 1 this year praying for a recession,” because historically during recessions, the athletic apparel and footwear company undergoes a reorganization.

Strong almost left Nike in 2017 due to its widely-reported toxic culture but decided to stay. She helped lead the group of women at Nike’s Beaverton, Ore.-based headquarters that surveyed their female colleagues and unveiled countless stories of sexual harassment and gender discrimination that led to the departure of several of the company’s top male executives.

“We were terrified, honestly,” Strong said. “That fear was a predominant element of our culture at that time. Fear is a powerful motivator. Short-term, you can get a lot out of people. Long-term, it’s devastating.”

Over the course of a couple months that culminated at the end of 2017, Strong said the group gathered about 500 stories to present to Nike President, Chairman and CEO Mark Parker, ranging from “bullying and toxic bias to a lot of sexual harassment … so then we got more scared.”

Strong said she believes without those allegations coming to light, campaigns like the recent “Just Do It” spots with Serena Williams and Colin Kaepernick wouldn’t have happened.

“We lost accounts because of that campaign [with Kaepernick], specifically our golf Nike accounts, which may not surprise you,” Strong said. “We said, ‘Cool, see ya.’ When you put a flag down on your values as a company, you’ve got to walk the walk. We continue to put pressure on ourselves to not just do unique campaigns but to walk the walk.”

She did, however, admit that her biggest concern now is that “we’re sliding back into old muscle memory” because although Nike fired certain executives and initiated certain training around diversity and unconscious bias, the company did not undergo a company-wide reorganization. “You’re still probably reporting to the same person and sitting in the same department,” she said.

Cavallo and Strong were among a room full of female marketing leaders who attended and spoke at the first Rogue Women event at which VentureFuel introduced a dedicated fund to back female-led companies.

“We wanted to create an environment to connect dynamic women from across large corporations, startups and investors to facilitate new relationships and encourage the next generation of change agents,” VentureFuel founder Fred Schonenberg said. “I was thrilled at the diversity of thought and raw, authentic sharing from each of the speakers. The whole day felt like a master class in how to drive change for your career, business and culture overall.”