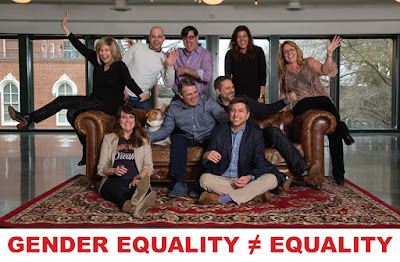 Adweek reported The Martin Agency presented its new executive committee, adding more White women to the group. How appropriate that the White advertising agency waited until Women’s History Month—and after Black History Month—to announce the divertsity revolution. “I’m proud of this news,” gushed CEO Kristen Cavallo. “But we’re not done. Not by a long shot. We’re not diverse enough. We see it. We’re on it.” Um, anyone who views the fresh committee (pictured above) can see it. And given that the late Mike Hughes already admitted, “We’ve done a pretty poor job on diversity as an industry and we’ve got to do better,” Cavallo’s comment about being “on it” is complete bullshit. At this point, Cavallo displays less believability than Joe Isuzu and less integrity than Joe Alexander.

Today The Martin Agency unveiled a new, more inclusive executive committee with twice as many female representatives as before. Four out of the nine members on the committee are women, and the agency also boasts a 50/50 male-to-female officer ratio.

A spokesperson also confirmed that president and 35-year veteran Beth Rilee-Kelley has left the agency but declined to elaborate.

“Gender discrimination isn’t an HR issue. It’s a cultural issue,” said CEO Kristen Cavallo in a statement. “And the fastest way to change a culture is to level the playing field in leadership.”

At the time, Cavallo said, “obviously, there is a need for a new direction,” and promised to increase diversity and improve culture at the creative shop best known for its Geico ads.

“I’m proud of this news,” Cavallo noted today, “but we’re not done. Not by a long shot. We’re not diverse enough. We see it. We’re on it.”

Chief among the promotions announced today is the elevation of Carmina Drummond, previously senior vice president and managing director of Agency Operations. Drummond will now assume the new role of chief culture officer, responsible for leading diversity and inclusion, learning and development and employee satisfaction initiatives.

Drummond joins the executive committee as its fourth female leader alongside Cavallo, CCO Karen Costello (who replaced Alexander in January) and CFO Janet White. The other five executives sitting on the nine-member committee are men.

The Martin Agency also announced the promotion of managing director Chris Mumford to the role of president. His main focus in the role will be to coordinate IPG integrated service offerings for clients, like Geico, accessing disciplines across the agency network.

Specifics regarding the departure of Rilee-Kelley, who ran the agency’s human resources department before being promoted, are unclear at this time.

In early December, the week after The Martin Agency parted ways with Alexander, Adweek published a story featuring testimony from 11 individuals who previously worked directly with the ousted CCO. They summarized a pattern of alleged misbehavior, spanning nearly two decades and also shed light on a monetary settlement reached with a former employee who accused Alexander of sexual harassment in 2013.