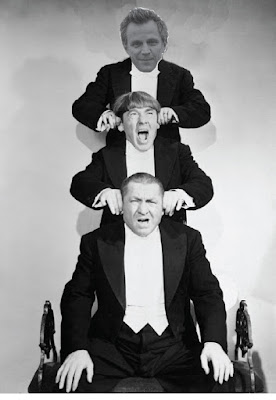 Advertising Age reported Publicis Groupe CEO Arthur Sadoun declared, “We believe that we are the only ones who have the right assets to succeed. We have a positioning that we think is the right one: be the market leader in marketing and business transformation.” No, the statement was not part of an annual comical video message to the troops. Maybe Sadoun’s French accent led to being misquoted, and he actually said asses versus assets. Regardless, the claim is essentially the equivalent of bragging about being the smartest Stooge among the iconic trio.

CEO Sadoun boast: Publicis is only holding company ‘with the right assets to succeed’

Publicis Groupe, the world’s third-largest advertising company, lifted its outlook for growth on the conviction that it’s the best placed to triumph over structural changes in the industry.

“We believe that we are the only ones who have the right assets to succeed,” Publicis Chief Executive Officer Arthur Sadoun said in an interview ahead of an investor presentation Tuesday in London. “We have a positioning that we think is the right one: be the market leader in marketing and business transformation.”

Agencies are battling cutbacks by major advertisers like Unilever and the rise of consultants like Accenture and Deloitte, which are becoming experts in shifting businesses online. Investor concerns about the trends were fueled this month when WPP Plc, the largest ad group, lowered its long-term profit outlook, triggering sell-offs for peers including Publicis, Omnicom Group and Interpublic Group of Cos.

Paris-based Publicis said it’s aiming to achieve organic revenue growth of 4 percent by 2020, driven partly by acquisitions, and plans to cut out 450 million euros ($555 million) of costs to boost profit margins. That compares with the company’s 2017 rate of 0.8 percent for organic growth, which strips out effects from acquisitions and currency swings.

Part of the cost-saving plan includes an investment of 300 million euros in talent, Sadoun told Ad Age, adding that Publicis wants to optimize the people it has and attract new talent.

The stock initially jumped 3.2 percent on an outlook seen as unexpectedly bullish by analysts including at Barclays. The shares fell 0.7 percent to 58.70 euros at 11:15 a.m. in Paris.

“The key question is whether investors will believe these targets, especially as they are largely based on M&A,” Barclays analysts led by Julien Roch wrote in research note. The guidance translates into annual earnings per share growth of 7 percent to 9 percent after mergers and acquisitions, according to Barclays estimates. WPP has an EPS growth target of 5 percent to 10 percent annually, though investors don’t believe WPP’s targets, the analysts wrote.

Publicis, home to agencies such as Leo Burnett and Saatchi & Saatchi, is in a good position to respond to the threat of Accenture and help customers transform their businesses digitally because it has been investing in its own consultant offering, Sapient, Sadoun said. Publicis agreed to buy Sapient for $3.7 billion in 2014.

“The question is: who has been transforming fast enough to still be relevant today?” Sadoun said. “While some are losing revenue because of the difficulties of some clients or some transformation, we are actually increasing this.”

The investor day will seek to “regain the trust in the name of the industry,” Sadoun said in an interview with Ad Age. “It’s about showing the world there is a way for a group like Publicis to be an indispensable partner.”

To bolster his point, Sadoun pointed to a video that the agency played during the event in which Procter & Gamble Chief Brand Officer Marc Pritchard said: “What’s impressive is how quickly Publicis and its management team came together to change.”

Pritchard added in the video: “The reality is that we’ve been reducing the number of agencies we work with for the past three years. We started with 6,000 and we went down to 2,500. But Publicis maintained a similar agency count, so they actually got a bigger share of our agency.”

Publicis shares had declined 6.2 percent over the last year before Tuesday, compared with a 32 percent drop for WPP.