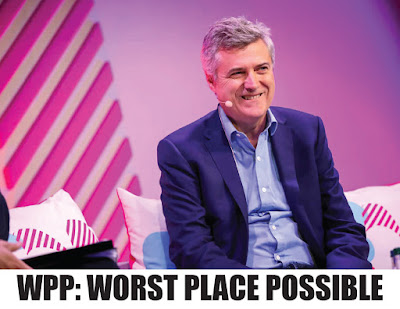 More About Advertising reported WPP CEO Mark Read, referring to his past role as a management consultant, declared, “It was the worst four years of my life.” Which is pretty much the sentiment that WPP employees will echo if Read lasts another three years in his current role.

‘It was the worst four years of my life,’ says WPP’s Mark Read about his time as a management consultant

At the Festival of Marketing, WPP CEO Mark Read was interviewed by Marketing Week editor Russell Parsons, who tried and failed to get Read to dish the dirt on his predecessor, Martin Sorrell, but did extract some healthy management consultant bashing.

Read said: “I’ve had the luxury of working in management consultancy. Luxury is probably the wrong word – it was the worst four years of my life. To start with, you work harder than the CEO of WPP and it’s a slightly thankless task. You decide on the answer within the first week of starting a project and spend the next three months trying to prove what you decided three months before, tell the client what the answer is, and work in isolation from them.”

As an example, he talked about New York’s High Line: “If you’re looking to regenerate the west side of Manhattan and you go to a consultant they’d talk about tax breaks and infrastructure and grants. If you talk to creative people they might say, ‘look we’ve got a fantastic railway that runs through it, we turn it into a garden – and it’s cheaper to do that than to tear it down.’ That application of creativity is what matters. It’s not enough to stare at the spreadsheet, or copy what ten other people have done.”

Despite his antipathy towards the consultants, Read (who worked at Booz & Company, now part of PricewaterhouseCoopers, in the 90s), did concede that WPP would inevitably become a bit more like them, because the group needs to develop new skills, around helping clients on the transformation journey. There is talk that WPP is going to launch its own consultancy brand, following the success of Grey Consulting.

While stressing that creative brands are still at the heart of WPP, he acknowledged that the silos between technology and creativity had to be broken down, hence the speedy mergers of Y&R with VML and JWT with Wunderman after he started the CEO job last September.

To stave off in-housing, Read agreed that agencies must respond better to client needs, but he also put the onus on marketers, saying that they have to be experts at buying agency services. “If you want to do search well, you should really understand what it is, how to do it, and what’s the best agency for it,” he said, while also stressing client responsibility for brand safety, which isn’t just an agency issue — everyone should be on top of it, understand the problem and know what’s going on.