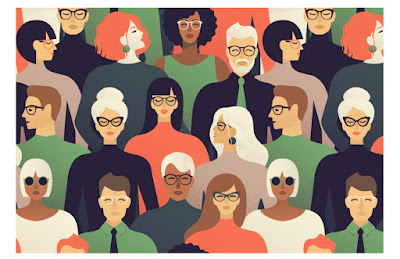 Advertising Age published doddering divertsity drivel from The Media Kitchen CEO Barry Lowenthal, who presented the increasingly clichéd Caucasian complaint about ageism in the advertising industry. Like lots of Old White Guys, Lowenthal uses arguments mimicking the historical positions of racial and ethnic minorities who have been denied entry into the field. The main difference, of course, is Lowenthal is making a case in defense of the people who have perpetuated the exclusivity and discrimination for scores of decades. Most outrageous is the title of Lowenthal’s essay: “Agencies Need To Understand That Diversity Means Hiring People Of Different Ages, Too.” Um, agencies don’t even understand what diversity means at all.

Agencies Need To Understand That Diversity Means Hiring People Of Different Ages, Too

Recently, a former colleague reached out to talk about making a career change. Now in his fifties, he’s a former head of a small agency and has had a distinguished career. He wanted my perspective on where he should focus his efforts next. Should he try to go client side? Get another agency job? Try something else?

Without even thinking, I told him not to bother looking at agencies.

The unfortunate truth, in my experience, is that most agencies would consider him too old. Agencies, in my observation, are not businesses that look favorably on people over 40. A lot has been written about this topic, and much of it suggests that, since advertising reflects popular culture, advertisers must be well-connected to youth culture in order to succeed—and that means you have to be young.

But is that really the case? I know plenty of older people who are incredibly well-versed in everything modern. I also know a lot of young people who can develop highly effective media plans for targeting people over 50.

The reality is that older people are more expensive and the agency model just can’t afford them. One of the easiest (and, in my opinion, laziest) ways to drive profitability is to “juniorize” a team. But when that happens, we lose the valuable perspective that only time and experience can bring to the table. Therein lies the counterargument, of course.

Many agencies think that young people easily reflect new media because they grew up on it. Older people have a harder time proving their value (and price tag). And if young people can do the jobs of older people for half the price, many companies do not feel pressure to address the mass exodus of people over 40.

An economist might say that the advertising industry reflects a pure working capitalist system. While it might make sense from a capitalist’s point of view, I believe that diversity in all forms leads to better work environments and better ideas. And better ideas lead to success, including financial success.

One aspect of agency life that perpetuates age discrimination is the way friendships are formed within companies. I’ve noticed employees often bond over late-night drinks, spin classes and happy hours. Those are all most often pursuits of the young singles demographic. If important relationships are built during activities that only cater to one group, then only that one group will build the kinds of relationships that lead to agency success. Groups that have more demands on their time, like parents and caregivers, are often excluded.

I mentioned this issue to friends in HR at different agencies. The response is typically along the lines of, “Everyone needs to explain what they can bring to a culture.” That kind of thinking only contributes to the problem. It’s not incumbent on the candidate to show how they fit in. We need to make room for all kinds of diversity, including people in their forties, fifties and sixties. I know making room isn’t necessarily easy. Agencies can start by building an understanding of what people with different backgrounds and at different life stages require. People over 40 have different needs and responsibilities than people in their twenties, including childcare responsibilities, eldercare responsibilities and probably longer commute times to the office. Instead of scheduling all the bonding events after business hours, agencies should consider shifting some to the afternoon, allowing people to attend without sacrificing family time.

Another way to build that understanding is to share learnings more regularly so that everyone can benefit from the collective experience. This allows us to go beyond a reliance on real-time experience—such as having “grown up” digital—and creates an environment in which lived experiences and hard-earned wisdom can come together for the benefit of the entire agency.

There are about 65 million people in the U.S. who are part of Gen X and more than 74 million baby boomers (along with 72 million millennials). Those people represent a lot of collective wisdom and experience and I hope we can continue to honor that in the advertising industry.

While we certainly have to get the economics right, we also have to be willing to make room for all kinds of diversity. That starts with believing in diversity of all kinds.

Barry Lowenthal is CEO of The Media Kitchen

I always have to laugh when I see old white people in advertising complaining about diversity, because they were all once young white people who didn't care about it enough to make any changes.

Now that they're getting affected, well then. All aboard the diversity bandwagon.