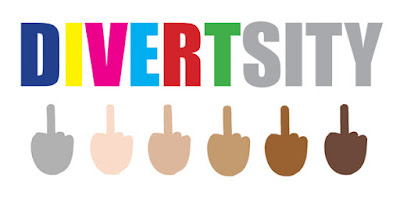 MultiCultClassics typically kicks off the New Year with a “year-in-review” post, but a busy holiday schedule prevented the annual report for 2016. Plus, it would have required too much work, as the previous 12 months presented lots of culturally clueless content. Indeed, 2016 was a direct extension of 2015, with diverted diversity—aka the White women’s bandwagon—accelerating and snowballing. On this ride, White women get promoted ahead of everyone else. Racial and ethnic minorities are pushed to the back, while White advertising agencies are patted on the back for being progressive advocates of gender equality.

In 2017, diverted diversity devolved in dumber, deliberate and devious ways. Don Draper once said, “If you don't like what’s being said, change the conversation.” It appears that adland has taken Draper’s advice in regards to diversity. That is, having grown tired of talking about being committed to racial and ethnic diversity—and knowing full well that it’s just talk without meaningful deeds or measurable results—the conversation has shifted to other types of diversity that are easier and preferable to handle. This is the equivalent of an advertising agency proclaiming, “Dammit, we can’t come up with a decent campaign for our global client. Oh well, we’ll just crank out a few banner ads and FSIs instead—while congratulating ourselves and receiving accolades for our half-assed efforts.”

This new direction for diversity demands a new label: Divertsity—because in the advertising industry, diversity has transformed into a series of diversionary stunts, schemes and smokescreens to avoid action and accountability on the core dilemma.

Divertsity is rooted in diverted diversity, which is a predominately White women’s movement, at least within the advertising industry. In recent years, the female firestorm has heated up in a variety of ways including:

• First and foremost, White women are being hired and elevated to high levels at high rates. Clients are mandating—or perhaps womandating is a better and cleverer term—the employment surge. In fact, clients are openly putting women ahead of racial and ethnic minorities, despite acknowledging that racial and ethnic minorities—especially women of color—face far greater discrimination than White women.

• Adpeople suggest and endorse quotas for gender equality, despite reacting with hostility when such thoughts are proposed for racial and ethnic minorities.

• White men proudly call themselves Manbassadors, despite refusing to publicly back racial and ethnic minorities.

• Award shows and industry leaders rally around female-friendly crusades and fair balance of female judges, despite reacting to pleas for non-White judges with cricket chirping.

• Prominent defenders of the cause—notably, Cindy Gallop, Brad Jakeman and Kat Gordon—spew spirited sound bites, despite having done little or nothing to affect change for racial and ethnic minorities (or women, for that matter) when they were in agency or client positions.

• The Glass Lion ceiling is being shattered with extra female awards, despite segregated indifference for trophies honoring racial and ethnic minorities.

• White advertising agencies invent innovative programs to recruit, retain and return White women to the field, despite settling on ineffective and contrived “solutions” for racial and ethnic minorities.

But wait, it gets crazier.

Divertsity adds hypocrisy like White advertising agencies bragging about being diverse or championing diversity while exhibiting exclusivity. Or producing diverse and targeted campaigns hatched by White staffers. Or fabricating faux diversity via enlisting celebrities to serve as “Chief Music Strategist” and other original roles. Or bussing employees to women’s marches, despite barely recognizing MLK Day.

Divertsity adds semi-legitimate diversity, but not enough. The majority of minority job activities are lateral moves, internal boosts and Chief Diversity Officers—the latter position growing increasingly pointless, given that CDOs have arguably less influence on diversity matters than CFOs, as the financial executives control the mysterious and mythical diversity budgets. In short, the number of racial and ethnic minorities in the advertising arena is not significantly growing, despite evidence noting certain sub-segments are shrinking in our ranks.

Divertsity adds diverse passengers to the White women’s bandwagon, further pushing racial and ethnic minorities to the back. The leapfrogging groups include White LGBT people, White old people, White people with physical, intellectual and developmental disabilities, White people with neurodivergent conditions, White plus-sized people, White thoughtful people (i.e., diversity of thinking), White conservatives and White or fair-skinned Brazilians—despite the fact that none of these groups are as underrepresented as racial and ethnic minorities on Madison Avenue.

Divertsity adds unlimited bullshit, as demonstrated by We Are Unlimited—the “agency of the future” that perfectly symbolizes today’s state of affairs involving diversity. Here’s a firm that was allegedly erected from scratch to solely service Mickey D’s, and overseen by DDB North America CEO Wendy Clark, who claims to have a restless ambition for achieving diversity nirvana. Yet at nearly every chance to bring her dream to life, Clark resorts to hiring White men, White women and Brazilians, also engaging in cronyism by tapping candidates within the Omnicom network. Of course, Clark institutes mandatory unconscious bias training, with mandatory sexual harassment training coming soon. In the end, the “agency of the future” bears an uncanny resemblance to every White advertising agency in the present and past. Oh, and the place is responsible for some of the worst crap ever conceived for the Golden Arches. 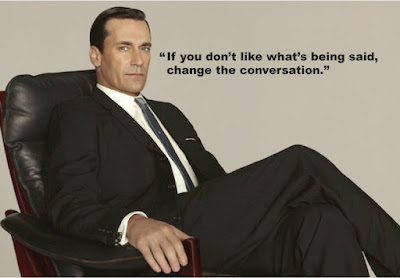