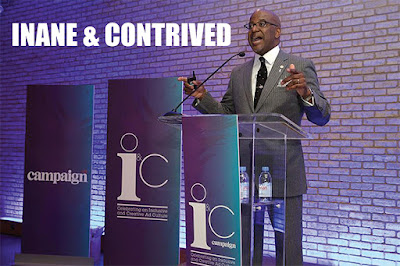 Campaign celebrated the maiden voyage of its I&C Conference with a report featuring lots of commentary that was I&C—Inane & Contrived.

The piece opened by stating, “One year after the ad industry was shocked into action by the discrimination lawsuit filed against former J. Walter Thompson Chairman and CEO Gustavo Martinez…” Huh? How was the industry “shocked into action” by the lawsuit? Sorry, but there’s been zero measurable progress made as a direct result of the legal proceedings. WPP and JWT have certainly created plenty of smokescreens and propaganda to create an illusion of inclusion, but the rest of the industry has maintained the status quo. And while the White women bandwagon has accelerated, one could hardly attribute the diverted diversity drive to Erin Johnson or Martinez.

Diageo North America VP of Corporate Relations and Constituent Affairs Marc Strachan apparently delivered revolutionary remarks. However, the Campaign report didn’t include attendance figures, so it’s tough to know if Strachan’s words fell on deaf ears or any ears; plus, were there prominent White ears in the Dream Hotel Downtown? “Advertising industry, you can change, but you need to burn down the current system of hurdles, serfdom, exclusion, and then maybe, you can change,” declared Strachan, adding that transformation could come voluntarily or “someone’s going to throw the fucking grenade.” Um, burning down the existing White industry will take more than an f-bomb and grenade. Somebody needs to invent nuclear napalm just to ignite the blaze. And who’s going to start the fire? Whites or minorities?

Campaign also wrote, “The industry stood up and cheered last year when General Mills, Verizon and HP told their agency partners to diversify or lose their business.” Huh? Did the trade publication notice what actually happened with General Mills, Verizon and HP? General Mills ultimately hired White AORs to handle its business, supplementing with women- and minority-owned firms. In short, the food client perpetuated “the current system of hurdles, serfdom, exclusion” referenced by Strachan. And HP is only riding the White women bandwagon versus revving up legitimate change. To say “the industry stood up and cheered” is about as accurate as insisting President Donald Trump greeted unprecedented crowds at his inauguration.

Strachan boldly predicted multicultural agencies will become a thing of the past. Um, multicultural agencies already are a thing of the past. “Many of them will not sustain because they just won’t be able to compete, whether it’s infrastructure, size, resources,” explained Strachan. “We’re going to have to be comfortable with that, the economic reality is going to impact that business.” Okay, but let’s not attribute the decimation to “economic reality,” as the extinction is being executed by White advertising agencies via “total market” terrorist tactics. Plus, even Strachan admitted clients fabricate excuses to avoid employing multicultural agencies as AORs. Minority firms have always had the deck stacked against them. No need to call in the CSI squad to expose how the murder unfolded.

Campaign US’ celebration of inclusion and creativity included some tough words for the ad industry. Change voluntarily, “or someone’s going to throw the #!&@ grenade,” said Diageo’s Marc Strachan.

One year after the ad industry was shocked into action by the discrimination lawsuit filed against former J. Walter Thompson Chairman and CEO Gustavo Martinez, Campaign US on Tuesday held its first I&C conference, a half-day summit that included frank talk about the industry’s struggles to diversity and a celebration of 16 creative teams that produced work defying stereotypes and featuring underrepresented people.

To see live coverage of the event, check out #CampaignIandC on Twitter. Below are five key points from the conference that warrant attention and further thought from everyone in the industry.

1. Advertising needs to burn, and Marc Strachan will light the first match

On the cusp of the 40th anniversary of “Roots” and the last day of Black History Month, Strachan declared “the time for talk is over,” and it’s time to burn the industry to the ground—so to speak.

“Advertising industry, you can change, but you need to burn down the current system of hurdles, serfdom, exclusion, and then maybe, you can change,” he said in his fiery keynote speech, adding that there are two ways to transform: voluntarily or “someone’s going to throw the fucking grenade.”

Today, target audiences are no longer homogenous, so to exclude them is to turn a blind eye to potential sales. “Change comes, driven by cash,” Strachan said. “If that’s what you’re trying to do, to hide, it’s no longer acceptable.”

He then rattled off a litany of excuses he’s heard during his 40 years in the business: “‘I don’t know how.’ ‘I don’t know where to look.’ ‘I looked but I couldn’t find.’ ‘We tried, but it didn’t work out,’” and called them “bullshit—all bullshit—hoodwink excuses by professional hoods.”

2. Quotas can work as part of a holistic approach

The industry stood up and cheered last year when General Mills, Verizon and HP told their agency partners to diversify or lose their business. But are quotas really the best solution to a long-ingrained diversity problem? Does anyone even use the word “quotas” anymore?

A panel titled “Are Quotas the Way Forward” suggested that the answer is no. Caitlin Lillie, director of talent at Work & Co., argued that quotas run brands and agencies the risk of making a checklist. If you check off your Hispanics, your LGBTQ, your elderly and your females, magically, you’ve solved diversity, she said. “Then what? What sort of planning are you putting in place to make sure that you’re growing those people?”

Warby Parker’s head of people Susan Lee agreed, providing a real-life example of how her company is experiencing a high turnover rate among LGBTQ, female and multicultural employees. “We have a very young culture,” she said. “We have a really wide range of sexual orientation. We have a large transgender community at Warby; we have people of color; we have women executives. But we have very high turnover in some of these areas because people aren’t feeling like we’re moving fast enough to create an inclusive environment in the company.”

But quotas—for lack of a better term—can work as part of a larger plan, but it won’t be an instant fix, said Paolo Gaudiano, president and CTO of Icosystem. “It’s not as simple as if we employ 50 percent women, all our problems will be fixed. It is true, however, that the kind of misogyny that you see is a little bit less likely to happen” if you employ more minorities, he said. “But you also have to think about the recruitment, the onboarding, inclusion, and it’s really about the complexity of all of these pieces together that has to be taken into account.”

3. Multicultural agencies will become a thing of the past

“Some of the ‘multicultural agencies’ are now just agencies that happen to specialize in a multicultural niche,” said Strachan. Diversity in advertising has come such a long way, he said, now larger holding companies are adopting the same strategies, that will, in effect, cause many multicultural agencies to go by the wayside. “Many of them will not sustain because they just won’t be able to compete, whether it’s infrastructure, size, resources,” he said. “We’re going to have to be comfortable with that, the economic reality is going to impact that business.”

Part of the reason is that millennials don’t see “multicultural” as a silo, but as everyday life. They “interact with people of all colors, all cultures, all backgrounds just as a standard day-to-day,” Strachan said. “You don’t silo. You might go by tribe: I’m a skater, I’m a geeker. I’m an early adopter. And ergo, I think you have a greater opportunity [to] control your future destiny.”

What happens when a brand produces a progressive or inclusive piece of work, and internet trolls unleash their vitriol in the comments? YouTube’s CMO Danielle Tiedt, in a panel discussion titled “Withstanding the Backlash: How to Stay Brave in the Face of Intolerance,” advised brushing it off.

“Only 8 percent of people on the total internet ever comment on anything—8 percent—it’s tiny,” she said. “And the people who do take time to comment, 70 percent of those only make negative comments ever. I think it’s important to put in context that it’s a very small percentage of people and the people who read comments are even smaller than that, so don’t get too wrapped up in that.”

Brands are fond of saying they only care about the ideas, and the best ideas can come from anywhere. But in practice, that may not really be true, said Strachan.

If a multicultural agency presented the best idea in a pitch for a major brand like Ketel One, “a lot of people at my shop would be hard-pressed to give them the business,” he said during a panel discussion titled “Creative Under the (Diverse) Looking Glass.”

The Diageo executives would “lose a lot of sleepless nights; they’d come up with a thousand excuses as why they shouldn’t—or they couldn’t—give them the business: infrastructure, or maybe they can’t handle it financially” he said, “and we are light years ahead of where we used to be.” But in the end, they would likely still not give the multicultural agency the business.

Mark Robinson, SVP at Carol H Williams Advertising, echoed this sentiment, saying that multicultural agencies lack the “deep pockets” of traditional ad shops, which is why they’re bought up by holding companies. “If you’re a multicultural agency whose reason for being is just that you’re multicultural and not that you are good, then you won’t survive. You’ve got to be good first and then expert in your specific subject matter second.”

Geoff Edwards, co-head of creative at Creative Artists Agency and cofounder of Saturday Morning, took it one step further. In order for a multicultural agency to survive, he said, good isn’t good enough. “You have to be exceptional.”

Honestly? It was sparsely attended. Most of the people attending seemed to be lower level hires “of color”, HR or professional Diversity Pimps 4 Hire (VPs of diversity, diversity consultants etc.) who were there because nobody high ranking or god forbid creative at an agency could be bothered to attend or care about diversity.

You can see for yourself.

It didn’t help that the prices for attending / sponsoring/ etc. were so outrageously high that only a few MadAve agencies could afford to be there, and those are the whitest of the white to begin with.

It mostly seemed like a diversity publicity stunt, where ad agencies and holding companies will get to crow that they were “Honored by the Campaign Inclusion & Creativity Conference” in their press releases and annual reports, and Campaign got all that $upport from $ponsor$.