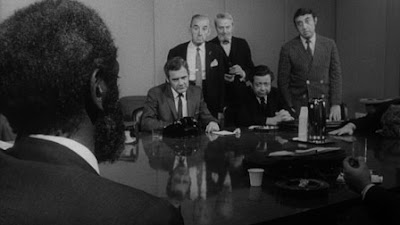 AgencySpy’s Patrick Coffee presented another belated BHM perspective, examining the ghettoized minority production community. Playing off the diverted diversity directorial drive dubbed #FreeTheBid, the culturally-clueless Coffee delivered a meandering mess that ultimately revealed nothing new. Additionally, the post inspired the standard comments from idiots displaying unconscious bias and conscious racism, as well as visitors criticizing Coffee’s journalistic skills. Um, looking for competent reporting from AgencySpy is like searching for diversity beyond the mailroom from a typical advertising agency. While #FreeTheBid received coverage in all the major trade journals, the minority production community settled for post at AgencySpy—which is probably the best one can expect for companies creating commercials for crumbs.

Most commercial directors, like most creative chiefs and CEOs, are white dudes.

That’s not a judgment, just an objective observation. And some people are trying to actively change things. We all remember #FreeTheBid, the effort by Israeli-American director Alma Har’el to get more women helming ads with the help of Pereira & O’Dell and a whole shitload of agencies/clients ranging from 180LA to Coca-Cola. (Here’s the list.)

But it’s not just women who have trouble scoring directing gigs.

According to some members of the multicultural production world (which, as you probably know, is a parallel market just like African-American creative agencies), lots of shops talk the talk on diversity and even build up their own Hispanic teams. But they almost always go back to their friends when it comes time to assign work.

Agencies are able to keep their hands clean by farming out the work of managing bids to freelance producers or sales reps who don’t even have agency email addresses. They often use so-called weasel words that don’t explicitly forbid certain bidders but get the message across clearly.

For example, “submit General Market directors reels ONLY” is barely-disguised code for “no Hispanic, African-American or Asian directors.” We also hear that the inclusion of any non-English work on their reels can immediately end consideration for big agency campaigns.

There’s also purportedly a resistance to “ethnic-sounding” names. That means obviously Hispanic American or African-American directors/producers—because anyone who’s made a Spanish language ad obviously can’t handle campaigns targeted to white people, right? But if they’re French or Italian or German or Swedish, then there doesn’t seem to be as much of a problem. And you know how American agencies feel about Brazil.

Another key phrase is “A-list directors,” which means “don’t bother submitting anyone with ethnic market experience.” Agencies often go for affordability in the end, but this is a way of thinning the herd, so to speak. We also hear that even multicultural or Hispanic agencies tend to do this after being acquired by major holding companies, presumably due to either budgetary concerns or a desire to keep all the gigs within the existing network. Why bother putting your names on the #FreeTheBid list if you keep steering work to the usual suspects?

You’re probably aware that “general market” agencies are moving to keep as much of the multicultural work as possible. A recent job listing for “Senior Hispanic Copywriter” at mcgarrybowen New York requires 3-plus years of agency experience, fluency in both English and Spanish, and “Experience in General Market and Hispanic Market Advertising.”

One can see why the directors and producers who aren’t getting these jobs don’t see it as a stylistic issue or a matter of who’s “a better fit” for the client. And just like the “bid ridding” phenomenon, the brands being advertised are usually unaware of the practice anyway.

Makes us wonder whether independent, multicultural or Hispanic agencies/production shops can survive on their own.

You could have a white agency owner get caught on camera using every ethnic slur imaginable while wearing full blackface, and there would STILL be comments from white people in the ad world saying it was misinterpreted, anyone who objects is a whiny snowflake, that's a lie, "there's no big conspiracy," "advertising is all about talent," etc.

There's no way this industry is ever going to willingly make room for anyone black or brown, ever. Not in this century.