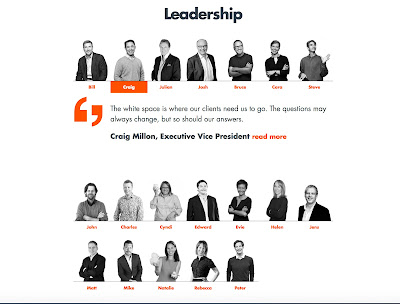 AgencySpy posted on the Ad Council tapping Jack Morton Worldwide to work on its “Love Has No Labels” campaign, which AgencySpy labeled as the “bias and diversity PSA campaign” originally launched by R/GA. The post included the following:

Durfee added that the team at Jack Morton were already fans of the “Love Has No Labels” campaign, which she called “a great fit from both a personal and agency standpoint.”

“The whole team is proud to support it and feels passionate about the cause,” she said, adding that it coincides with IPG’s own diversity initiatives.

Wow, here’s the perfect label for Durfee’s comments: world-class bullshit. The folks at Jack Morton Worldwide should first rethink bias across race, gender [and other areas] in their own offices. A peek at the company’s leadership (depicted above) inspires another label: White advertising agency. If Jack Morton Worldwide is a “great fit” for the assignment, it only underscores the hypocrisy and phoniness of the campaign. Yes, one could say that “Love Has No Labels” actually “coincides with IPG’s own diversity initiatives”—that is, it’s all a PR pack of lies.


“The white space is where our clients need us to go.”

Because as an ad agency, Jack Morton is definitely in an all-white space already. This isn’t going to level the Ad Council playing field, it’s going to make it even more tilted.

Everyone always forgets that Ad Council is a gigantic scam that only benefits wealthy white agencies and partners. Trust me, these aren’t non-paid gigs when they do those big elaborate productions that go viral.

Those have rich budgets, and tons of support, then Ad Council and their agencies drive all the crap PSAs (you know the ones, they always look like they were shot by a Sears Photo Studio staff) to minority agencies and partners.