Campaign published a report titled, “This is adland ‘17: Part two: Ethnicity”—the colored companion to its examination of the White women bandwagon cruising through the industry. The data is dodgy, in that adland is segregated into two silos: White and BAME—an acronym for Black, Asian and Minority Ethnic, which makes it difficult to determine specific percentages for non-White segments.

Key takeaways from the report include:

• BAME representation has decreased in the past two years.

• Campaign stated, “BAME individuals make up about 14% of the UK population, but most of the larger agencies are based in London, where this percentage is higher.” In other words, the reduction of BAMEs at White advertising agencies in London is fucked up.

• Campaign stated, “This research only captures data on gender and ethnicity. Of course, diversity is far broader than this. It is not even limited to sexual orientation, age, disability or socioeconomic background—all topics Campaign has covered extensively—but about respecting individuals and the different qualities they bring to work.” In other words, expect old White people, disabled people, LGBT and diverse thinkers to ultimately leapfrog over racial and ethnic minorities in the years ahead.

• IPA President Tom Knox stated, “The good news is that, at the most junior level, the representation of individuals coming from a BAME background is at the national level of 15%. However, the big issue is that this figure is only 4.7% in the most senior roles and 5.5% in other executive management.” In other words, look for a spike in outreach programs targeting inner-city toddlers.

Finally, the Campaign report was illustrated with a clichéd image of colorful hands (enhanced and depicted above), underscoring the dismal dearth of dark-skinned people in adland. Rainbow-colored people are more likely to land advertising jobs than Blacks. 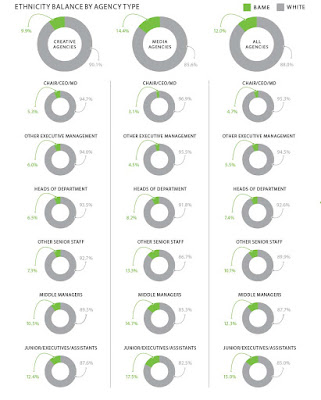 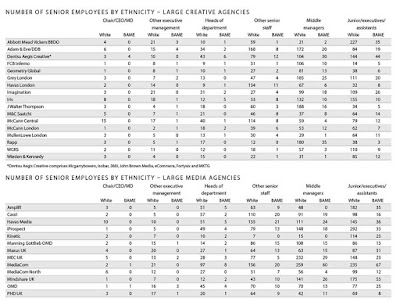 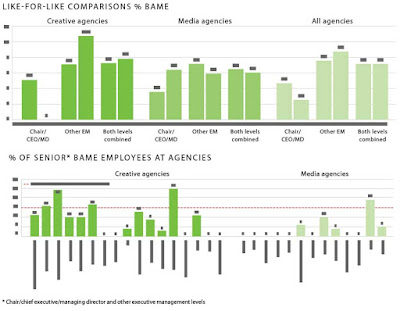