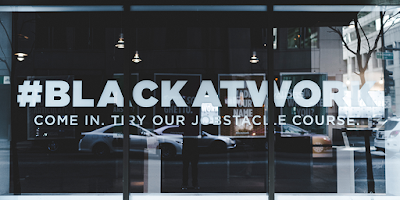 Adweek reported Havas in Chicago pooped out a pathetic promotion to pay tribute to Black History Month. The agency created a “jobstacle course” designed to help non-Black employees get a sense of what it’s like for Black people to work in the predominately White advertising industry. Ironically, the wannabe breakthrough concept features all the standard clichés involved with being Black on Madison Avenue and beyond. “I love reading these articles about how white and old the industry is, and the industry itself acknowledges and talks about the problem versus actually changing and activating on the kind of issues we have,” said Havas Chicago CCO Jason Peterson. “We are by no means perfect, but acknowledging the issue and talking about it is something we take really seriously. I think everyone needs to look at it and think about how we are going to change and act differently if we want this industry to evolve and be better.” Well, for starters, Peterson might consider the simplicity of substance over style, sharing the hiring figures at his own office and within the nepotistic Havas network. Of course, such an act doesn’t allow for self-absorbed hype in trade publications. But it would clearly underscore the true obstacles Blacks face from idiots like Peterson—the results of which can be fully experienced by peeking at the Havas careers section on the company website.

In honor of Black History Month, Havas Chicago wanted to do something that would get its employees and the people of Chicago to not only reflect, but also learn a little something about what it’s like to be black in an ad agency today.

A team of employees decided to create an obstacle course in the lobby of the building. Each obstacle was designed to teach the rest of the agency about what a black man or woman might experience in the workplace while also starting a much needed conversation about the lack of diversity in the advertising industry.

“I love reading these articles about how white and old the industry is, and the industry itself acknowledges and talks about the problem versus actually changing and activating on the kind of issues we have,” Jason Peterson, the agency’s chief creative officer, said. “In my point of view, America is multicultural, so if you’re an agency that doesn’t have or isn’t made up of a multicultural point of view, there’s no way you can do your job properly.”

Peterson went to Jason LaFlore, an art director at Havas Chicago, and a few other creative and strategy people at the agency and asked them to come up with “something that’s going to show our point of view and not be passive and have a real active positioning,” Peterson said, in honor of Black History Month.

LaFlore and his team got to work and came up with the idea of the #BlackAtWork campaign. Each obstacle in the “jobstacle course” came from real experiences or conversations members of the team previously had in their careers.

The first obstacle, the beam of perception, is a balance beam that participants have to cross. On one side of the beam, the agency printed the word “angry.” On the other side, it printed “lazy.” The purpose of the beam is to illustrate some common stereotypes that present themselves in the workplace.

A second obstacle, the speech bubbles, is about why certain questions and comments are inappropriate. Examples include “Can you teach me how to Dougie?” and “That’s so ghetto.” The team hung the comments and questions from the ceiling, teaching people to dodge the culturally insensitive words.

A similar obstacle, the Hollywood shuffle, tackles the weight many black people feel when co-workers ask them about black culture, the assumption being that one person knows everything from the latest dance moves to slang or cultural trends.

“It spoke to the idea that a lot of times, whether it’s a company party or something, people expect that the black guys are going to dance,” LaFlore said. “I don’t always know all the dance moves and all the trends that are happening just because I’m a minority in the office.”

The obstacle course will be up in Havas Chicago’s office for the rest of February. As with past activations the agency has set up in its lobby, the hope is that people will see the sign on the lobby window (it currently reads “Black At Work”) and pop in to see what’s going on. Anyone can take the challenge, even other agencies in the Chicago area.

“We are by no means perfect, but acknowledging the issue and talking about it is something we take really seriously,” Peterson said. “I think everyone needs to look at it and think about how we are going to change and act differently if we want this industry to evolve and be better.”

How many PR backflips and stunts will an agency do in lieu of hiring anyone black?