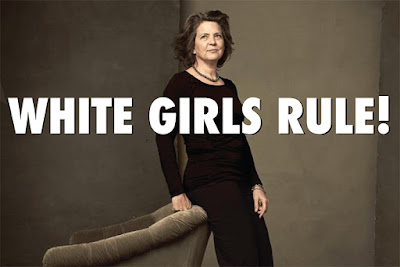 Advertising Age reported on the latest diverted diversity directive designed to ban gender bias at Cannes. The declaration was spearheaded Badger & Winters Chief Creative Officer Madonna Badger, who proclaimed, “This will make every ad agency rethink the type of advertising they’re doing and whether or not it’s award-winning, and because Cannes is the absolute Oscars of advertising, they will set the tone for all the other awards all over the world.” How fitting that Badger would reference the Oscars, which has mirrored the advertising industry by historically excluding racial and ethnic minorities from its festivities. The Academy Awards, however, made dramatic and deliberate efforts to change. In contrast, Madison Avenue and Cannes dodge the dearth of diversity by promoting White women and handing out trophies for doing so.

The ad industry’s largest annual event and awards program, the Cannes Lions International Festival of Creativity, has agreed to caution jurors not to recognize work that reflects gender bias.

“Work that objectifies, perpetuates negative and harmful inequalities and gender bias hurts all of us,” the festival will now tell all jurors in their briefings before judging. “The criteria for knowing if a submission is objectifying or gender-biased is empathy. Use your heart and mind to determine if the submission is acceptable to you. What if the person portrayed in image or copy was you? Or your daughter or son, sister, father or mother … would you be O.K. with the portrayal? Do you feel they are being treated as whole, human and equal, and how you would like to be treated?”

The new guidance comes amid a roiling conversation about sexual equality and gender bias in advertising, both in employment and in representations of gender roles in ads. And it results from a petition written after last year’s Cannes Lions by Badger & Winters Chief Creative Officer Madonna Badger, who helped ignite the gender conversation with her “#WomenNotObjects” initiative started a little over a year ago.

The 2016 Cannes Lions included an award for Bayer ads by AlmapBBDO that were roundly decried as sexist. One, for example, said, “‘Don’t worry babe, I’m not filming this’.mov” above two boxes of aspirin. They were so-called scam ads, created for the purposes of entering awards contests, and they were subsequently disowned by Bayer and the prize was returned. But their recognition at Cannes, and plenty of more subtly sexist advertising in the real world, helped fuel more than 1,000 signatures for Ms. Badger’s petition.

“This will make every ad agency rethink the type of advertising they’re doing and whether or not it’s award-winning, and because Cannes is the absolute Oscars of advertising, they will set the tone for all the other awards all over the world,” Ms. Badger said.

“She’s a hugely respected figure for the work she’s done and the position she’s taken in the industry, so we’d been talking about the best way to position this and bring it to people’s attention,” he said.

Including the criteria in jury briefings felt like a natural step for the festival because it has been working on gender issues for a number of years, Mr. Thomas said. In 2015, Cannes added the Glass Lion: The Lion for Change, which rewards outstanding efforts challenging gender biases, and a year before that, it launched the See It Be It mentorship initiative for young women. Ms. Badger will serve as the ambassador for the 2017 See It Be It program. The festival has also named more female jury presidents, and more female judges in general, over the past few years.

Unlike the official Cannes rules, such as rule No. 3b, which says Ascential has the right to refuse entries that “offend national sentiments, religious sentiments or public taste,” the criteria around gender bias and objectification will serve more as a “guideline,” said Mr. Thomas. The criteria, he said, could possibly become a rule in the future, but he’s hoping a more mindful industry will make that unnecessary.

Traditionally, each jury must sign off on every piece of work that is short-listed for the Lion in which they are responsible, essentially publishing the short lists in their names. With the new criteria in place, they will now also have to affirm that they believe the work does not objectify women or perpetuate gender bias.

Badger & Winters President Jim Winters said that by implementing the criteria, Cannes “sends a very powerful message to the chief creative officer of every agency that they will need to be stringent in terms of what meets their standards, not only in terms of what they submit, but ultimately it will make them more conscious and thoughtful about any work they do in their agency.”

“I think it’s a good idea,” said David Lubars, chairman and chief creative officer of BBDO North America. Mr. Lubars has chaired three Cannes juries in 10 years: Titanium in 2006, Film & Press in 2009 and Branded Content and Entertainment in 2015. “Every jury I’ve headed killed ads like that. No one wants to award work with mean undertones. And agencies shouldn’t do things like that.”

There might be blurred lines in certain areas, like fashion, where nudity is a factor, Mr. Lubars said. But he said people, including Cannes jurors, are for the most part decent rather than mean-spirited. “It’s good to have a heightened awareness of things,” he said.

Over the last year, “#WomenNotObjects” and its hard-hitting videos have caught the eyes of media outlets, awards shows, conferences and celebrities like actor Ashton Kutcher, singer Alanis Morissette and George Takei, known for his role on “Star Trek,” who posted about the campaign on social media. The initiative is planning to release another video in a few months, said Ms. Badger.

Ms. Badger, who began “#WomenNotObjects” partly to honor her three daughters, who died along with her parents in a 2011 house fire, said she believes that ending objectification in ads will also lead to more women getting into creative roles and leadership positions.

“#WomenNotObjects” has helped Badger & Winters reshape itself as an agency and focus on assisting clients across all industry categories to connect with women in genuine ways, said Mr. Winters. Some of its project-based creative consulting includes work for MetLife, Starboard Cruise and Peloton.

As for Ms. Badger, she said she plans to speak about the campaign at corporate offices and events throughout the year, such as Google, the Women in the World Summit, the 3% Conference and, of course, Cannes.

In June, for the 2017 Cannes Festival of Creativity, Ms. Badger will speak on a panel about gender, diversity and objectification of women with Procter & Gamble Chief Brand Officer Marc Pritchard.

Mr. Thomas said the request for speakers to discuss issues around gender this year at Cannes has been “huge,” which makes the new criteria in the jury briefings even more relevant.

Again, this feels like "Diversity" Initiative Number 1,000 that is by white women, for primarily white women to benefit from, after ignoring ethnic diversity for DECADES.

Ethnic diversity issues came up for years, and the only solution these oh-so-open-minded, oh-so-socially-conscious white men and women could come up with was "It's a pipeline problem, nobody of color is smart enough / savvy enough / educated enough to enter advertising as a career path, we must mentor them when they are prepubescent (while cameras are snapping pictures for press releases, of course) and the problem will go away in a few decades or so."

But gender diversity? Somehow they found the strength and will and desire to snap to immediate action.

And of course they never say "Gender issues in advertising are because women aren't smart enough / savvy enough / educated enough to handle this, we must launch a training program." Oh, no. No child mentoring for white girls. It's straight to Cannes and a professional level Cannes-based solution set to take effect in a few months WHEN IT AFFECTS WOMEN LIKE MADONNA BADGER AND HER WHITE FEMALE COLLEAGUES DIRECTLY.

THEN all the stops are pulled out.

Here's a post specifically asking for more (white) women to submit to a senior creative roles.

NYC CD, GCD and ECD roles (full-time/staff): I have presented some great men for these roles. I would love to present some more great women. In fact, I am being asked by these agencies and clients to present more women.

If you are a female creative looking for a Integrated CD, GCD or ECD role in NYC, I would love to connect. Relocation assistance is available from within the US. One of these may not be a the right role, but I am looking to connect with more female creatives in the hopes presenting a more balanced list of candidates now and in the future. Thank you! barbara@mightyrecruiting.com (cc: Kat Gordon)


Will recruiters ever ask for more POC for a general market creative department?

No, recruiters will never ask for more POC.

Their CLIENTS might ask them to look, but then they do things like recruit overseas because those (mostly white female) recruiters can't tell the difference, nor do they care, between a kid or professional of color in their own US backyard, and an Anglo-Indian Oxford grad (and guess who'll get the job, because they already have a career and boatload of Cannes awards from England?).

Or they filter out POC by sneering at their books and asking them to remove all the the ethnic market work before they'll even tell them what agency is looking for POC. I see this trick all the time. They block them before they even get near the outer gates.

I've seen white recruiters send out blasts looking for "Hispanic speaking Creatives" because they're too culturally clueless to know Latinos speak Spanish, not "Hispanic." That happened in 2016, not 1946.

I've seen white recruiters literally look past black candidates at in-person events and focus on white and Asian females instead.

Now we're in a situation where minority male CDs, GCDs and ECDs are being neglected and passed over so more diverse (and socially acceptable) white females can get a chance to get ahead. As more and more calls for female creatives go out from recruiters, you'll see more and more black and brown men shut out entirely.