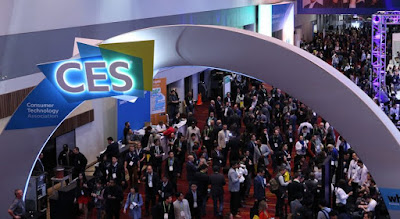 Adweek reported more on CES 2018, continuing to critique the trade show for its lack of diversity. Honestly, given that the tech industry’s exclusivity is common knowledge and openly acknowledged, why bother hammering an event for appealing to and reflecting its core audience? Divertsity was on display, with advocates including HP CMO Antonio Lucio, who declared, “[Diversity in tech] may take a bit longer than all of us anticipated, but let’s get started.” Yes, things tend to take a bit longer than anticipated when half-wits like Lucio promote half-assed efforts.

Voice Reigned at CES 2018, but Diversity Was Still Elusive

Every year, the Consumer Electronic Show sets the agenda for the biggest trends and gadgets. Thousands of marketers descend into the desert to discuss the tech that consumers will soon get their hands on—and what it means for brands.

As technology weaves more intricately into our daily lives and consumer adoption continues to grow, CES’s packed show floor—clocking in at 2.5 million square feet across 11 venues, to be exact—has become a bit of a running joke for marketers in recent years. Advertisers know well that 90 percent of the products (think smart litter boxes or noise-canceling devices connected by Bluetooth) they see during the weeklong event won’t go mainstream. But this year, they’re particularly bullish on the other 10 percent, namely voice and artificial intelligence.

Amazon’s Alexa and Google Home were on the lips of every big brand and agency exec in Las Vegas, popping up in dozens of companies’ pitches and demonstrations about the Internet of Things.

“We’re really interested in voice assistants—we’ve seen a lot with Alexa and Siri,” said Meredith Verdone, Bank of America’s CMO. “For us to understand how people are interacting with chat is really helpful for us to see the consumer behavior of what’s working [and] what’s not working.”

Among Las Vegas’ miles of casinos and conference halls, voice got its big IRL moment. Google Home’s activation included a giant gumball machine showing how artificial intelligence works by asking consumers to play a game where they ask the voice assistant a series of questions. Google also conducted a large out-of-home and media campaign in casinos and on the monorail system.

Meanwhile, Amazon was unavoidable even during a quick walk around the show floor, as both major brands (like Sleep Number and Whirlpool) and smaller startups pitched AI-infused products. The commerce giant also hosted at least nine panels talking about itself.

“Hopefully, at a certain point, it will be more organic—there will be more natural language understanding, so you can speak more eloquently, [more] fluidly and faster,” said Michael Bassik, managing director of MDC.

One thing not prevalent at CES: Marketers’ one-on-one meetings with the platforms. Instead of spending time talking with platforms, it seems like advertisers this year were focused on seeing the future through techy gadgets.

While flashy and glitzy tech was the main attraction at CES, one thing that wasn’t on full display was diversity.

Going into CES, much was made about the conference’s lack of female solo keynoters, with some marketers suggesting a boycott. While companies like Twitter, Sonos and Medialink hosted women-led panels and programming, the lack of diversity in both gender and ethnicity was prevalent at CES.

HP CMO Antonio Lucio, who has made a big push for more diverse teams for the past year, focused on attending non-official CES events—like Twitter’s #HereWeAre event with 150 attendees, which was live-streamed and racked up two million viewers. The two-hour event included Kara Swisher, cofounder and executive editor of Recode; Linda Boff, CMO of GE; and Kimberly Bryant, founder of Black Girls Code.

Still, booth babes were in clear sight at several companies’ displays, and an event featuring sex robots at a nearby nightclub went viral after it was revealed that it was aimed at attracting women.

Diversity in tech “may take a bit longer than all of us anticipated, but let’s get started,” said Lucio.