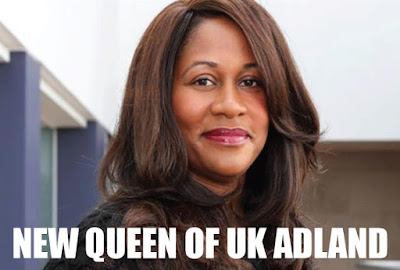 Campaign reported MediaCom UK Chairwoman Karen Blackett was named WPP UK Country Manager—a new role at the White holding company. According to Campaign, Blackett is now “the most important agency leader in the British ad industry.” Then again, it would be interesting to learn how her current salary compares to others in the field—especially in contrast to WPP Overlord Sir Martin Sorrell’s compensation package. While Blackett’s elevation is a well-deserved and groundbreaking move, it technically doesn’t improve diversity in adland, as she was already on the WPP payroll. But the appointment helps the cause overall, as Blackett has always been a vocal proponent for inclusion. “The ad industry is not diverse enough,” remarked Blackett. “It doesn’t reflect the consumer base that our clients are targeting.” The critique is actually more dramatic when considering that WPP is “perhaps the most diverse example of diversity of any single organisation.” Can’t wait to see what happens if Blackett must engage with WPP Spain Country Manager Gustavo Martinez.

WPP has named Karen Blackett as its first UK country manager, making her the most important agency leader in the British ad industry.

Blackett, who will retain her current role as chairwoman of MediaCom UK for six months, has been appointed with immediate effect. She will work with 17,000 staff in dozens of agencies spanning media, creative, design, branding, data and public relations across WPP’s £2 billion-a-year UK operation.

She said her priorities include getting WPP’s agencies to work “in a more joined-up and collaborative way”, developing new products and “managing and diversifying the talent base”.

Blackett maintained that WPP, the dominant agency group in UK advertising with close to 40% of the agency market, has “headroom” to grow further organically and she identified “high-growth” and e-commerce clients as sectors where “we don’t have a big enough market share”.

She said: “If you look at the top 100 global brands, then we’re doing pretty well. But if you look at another metric like ‘high-growth’ businesses, we could be doing a lot better.”

Sir Martin Sorrell, the chief executive of WPP, described Blackett as “an exceptional and inspirational leader” and “a tireless champion of diversity in our business, in the wider sector and in public life in general”.

He said in a memo to staff: “Karen will focus on our core strategic priority of horizontality: ensuring our companies work together effectively and present a seamlessly integrated and simplified offer to clients.

“She will also support efforts to attract and retain the best and most diverse talent, generate cross-group business opportunities and identify potential acquisitions and investments.”

Blackett, whose parents grew up in Barbados before moving to Britain, was named the “most admired” business leader in the UK ad industry in a survey of agencies for Campaign’s 2017 School Reports.

She acknowledged that her promotion to WPP country manager has symbolic importance because she is black, female and “from a working-class background”.

She said: “The ad industry is not diverse enough. It doesn’t reflect the consumer base that our clients are targeting.”

Blackett hopes to apply some of the lessons that she learnt at MediaCom, Britain’s biggest media agency, and its predecessor The Media Business, where she started in 1995, after spells at CIA and Zenith.

“When you get diversity of thought, you get better answers,” she said. “It’s the route to creativity.”

Blackett, who was UK chief executive of MediaCom from 2011 to 2015, sees parallels between her new role as WPP country manager and her past job as MediaCom’s chief operating officer for EMEA when she worked with “a group of incredibly talented CEOs” from different countries to collaborate more effectively.

“I don’t think it’s about ‘command and control’ — that’s never been my style,” she said. “It’s really about championing and collaborating and influencing.”

The CEOs of the different UK agencies will keep what Blackett described as a “solid” reporting line to their respective global or regional agency CEO — rather than reporting to her.

She added that there are no plans for WPP to have a single P&L for the UK “at this moment of time”, explaining: “My role is to create a UK team across the UK operating companies and make them work better.”

She will have a small office and team but does not expect to recruit externally.

Blackett, who has only worked in media agencies, knows most of the leaders of WPP’s ad agencies but said “I need to know better” the UK agency CEOs in other areas such as branding, digital and PR.

Sorrell is under pressure to simplify WPP after it cut its global revenue forecast three times last year and its share price slumped 26% from £18 to just above £13 as FMCG clients reduced agency fees.

However, WPP’s UK operation, its biggest after north America, performed well as its net sales rose 3.2% in the first nine months of 2017 compared to a 0.7% drop globally.

WPP, which said in its 2016 annual report that it had more than 160 companies, has slashed the number of agency brands that it operates in the last 12 months.

MEC and Maxus have merged to form Wavemaker, Wunderman has absorbed Possible and Salmon, five branding and design agencies including Lambie-Nairn and The Partners are becoming one group, and today research group Kantar brought together four agencies in a single unit, Kantar Consulting.

WPP has also been appointing country managers in about 50 countries as part of the move to improve collaboration and Blackett said she has talked to several of her counterparts to pick up ideas.

She said there is “an opportunity to avoid duplication of effort” but insisted: “I don’t think it’s about cutting costs. Yes, there are synergies that can happen but let’s think about creativity and growth.”

Blackett added WPP has “talked about horizontality for three or four years” and it needs to become “a strategy” that is embedded in the way the company does business, rather than just because “a client demands it”.

At the current point in time, and with associates included, WPP says it has approximately $3bn (£2.25bn) in UK revenues and 17,000 staff.