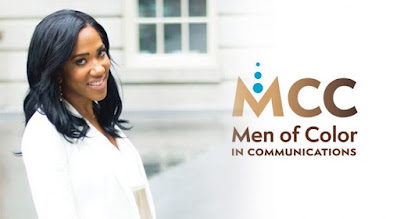 Adweek reported ColorComm launched Men of Color, a male companion to the organization for women of color in advertising. It’s a challenging venture, as senior-level Black and BAME representation is declining in the U.S. and U.K. advertising communities. Hell, Black women are scarce in the field too. The image accompanying the Adweek story, oddly enough, hypes Men of Color—yet shows a Black woman. Meanwhile, CaucasianComm continues to thrive and prosper.

MCC aims to provide resources and build a networking community

ColorComm, an organization for women of color in advertising, PR and communications industries that launched in 2011, is introducing a new group called Men of Color in Communications.

MCC aims to provide resources to men of color in advertising, PR and communications, promote the advancement of men of color in leadership roles in these industries and provide a formal setting for networking.

The group will launch on Jan. 26 at a luncheon event in Washington, D.C., where the Group CEO Art Collins will be the featured speaker.

MCC founder Lauren Wesley Wilson told Adweek that Collins was clearly a good choice—the event was nearly full within a few days of sending out invitations. Given the positive reception to MCC’s initial event, Wilson foresees similar rollouts in New York and Los Angeles in the near future.

“Men of color face very unique challenges in general, especially in this industry,” Wilson said. “The politics and the soft skills are often the part that sometimes keep men of color from leadership. There are men of color in leadership in agencies and the ad world, but it’s very few, so we want to tell the stories of the people who are working in this business, who are in leadership, who have reached the top and also inspire those who are on their way.”

ColorComm’s aspiration is for the group is to become a large community providing “a resource and access for talent and for growth in this industry.”

ColorComm itself has grown to a community of 40,000 women across PR, advertising and communications, from official members to those who have attended events or been involved with its content site.

“What’s frustrating is hearing that there’s not enough people in the industry or you don’t know where to find them,” Wilson said. “I push back and say here’s an organization of 40,000 people who you say you can’t find.”