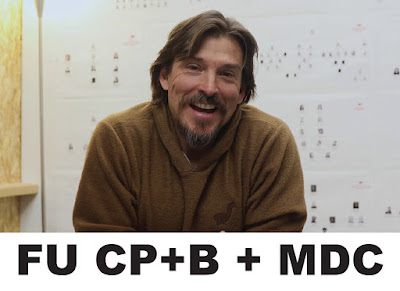 Advertising Age reported CP+B Chief Creative Engineer Alex Bogusky has left the station. Again. Hey, there are a bunch of White advertising agencies in MDC Partners probably seething with jealousy that Bogusky was allowed to bail out.

Less than 18 months after CPB announced that Alex Bogusky was returning to the agency, the co-founder will once again be leaving the building.

CPB Partner and Chairman Chuck Porter says Bogusky made the decision to depart, citing the desire to reprioritize and focus more on family. “We spent 80 hours talking about it over a month,” Porter says. “It wasn’t an easy decision because there were a lot of things he liked, but he thought it wasn’t really fair for the agency if he wanted to reorder his life and not step away.”

Bogusky, says Porter, will not leave immediately but will transition out over the next few months.

In August 2018, eight years after the storied creative departed the MDC agency, CPB surprised the industry by announcing that it was bringing Bogusky back as co-founder and giving him the newly minted title of chief creative engineer. But the homecoming didn’t turn out as many had anticipated.

Bogusky, one of the few larger-than-life creative directors left in the industry, was known for breaking new creative ground for clients like Mini and Burger King. (Famously, he instructed his staffers to think of the press release and the story a campaign would generate before the media itself—an approach that’s now become standard practice in the industry.)

Expectations ran high with his return, since Bogusky stepped back in just as the agency was in reset. Earlier that year, CPB closed its flagship Miami office and two month after Bogusky rejoined, the shop shuttered its Los Angeles outpost. The return, coming at a time when agencies have been struggling to reinvent themselves in the face of shifting client needs and increasing competition from consultants, was heralded as something of a second coming.

In an interview with Ad Age, Bogusky said he intended to remain close to the creative because “it’s the quickest way to have a positive impact,” he said, and “if I don’t jump in on the work and with the teams, I won’t have a real sense of how to improve the process.”

But since then, there has been a dearth of bold, game-changing ideas at the shop. The agency produced some entertaining work, but arguably nothing more notable than what it had been delivering already. There was a co-branded campaign for Hotels.com and Poo-pourri to steer couples through their “first poo with Boo,” while another for Fruit of the Loom saw the brand creating a limited-edition tee, with fan and NFL star Alvin Kamara. Since he signed on, the agency took on global creative duties for Scotch whisky brand Ballantines and also added fast casual chain Noodles & Co. and North American construction company Sunbelt Rentals.

Outside of the work, the agency’s moves in the months after Bogusky’s return seemed like jargony press release fodder. There was the shop’s rebranding from CP&B to CPB, along with the introduction of a “leaner” and more “agile” creative process the agency branded as Gut+ and “Crisp Jam,” a product offering dedicated to project-based work promising to “get to big ideas fast.” Bogusky seemed to spend much of his time on a podcast, “The Woodshed,” about “demystifying the creative process.”

There were also a number of head-scratching stunts. In October of 2018, the agency and Bogusky announced “The Quitty Awards,” declaring the shop was dropping out of the awards circuit and encouraging other agencies to do so too.

Observers believed that Bogusky’s re-entry would be the kick in the pants both CPB and the industry needed. Former and current CPB staffers believed he would bring new energy to a flagging shop. Gut Agency founder Anselmo Ramos, who at David helped to steer Burger King through a creative renaissance that seemed to follow in the footsteps of CPB’s work, said on Twitter, “This is like Steve Jobs coming back to Apple advertising version.”

Yet others likened it to an act of desperation,” with one former MDC staffer saying “It’s like Michael Jordan going back to the Wizards,” analogizing the comeback to an aging athlete trying to recapture the glory, way past their prime.

Given the agency’s output since Bogusky’s arrival, the latter might seem to ring true. But Porter says his contributions have been internally palpable. “He reorganized the creative department into a different, more efficient and effective structure for our clients—what we call ‘houses,’” he says. “He worked with data and analytics people we know toward creating a new methodology for planning and testing creative development that makes it more reality-based and empirically-based. It’s made our planning and creative quicker, smarter and more data-driven.”

Though we haven’t seen that yet play out in the work, “It was a complex process and I think that the results of that process are coming,” Porter says.

CEO Erik Sollenberg says that Bogusky didn’t return to do what he had done previously. “Based on his experience in startup and tech, his role was to look at our process thinking, at data. What he has been doing is changing the perspective of how advertising can be done. The effect will be long-term rather than directly digging into the creative.”

As to whether or not 18 months was long enough for him to impact the agency, Sollenberg says, “of course it would have been different if he’d stayed longer, but I highly respect his decision to live his life in a different way.”

For now, the agency isn’t looking to fill the position. Porter says Bogusky will still have an office at the shop where he’ll continue his personal projects and perhaps even do some consulting.

While parent company MDC has been making efforts to streamline and reorganize, Porter says that was not a factor in Bogusky’s decision to leave. “His relationship with MDC is really good, and when we began to talk to them about it, they encouraged him to stay to make this transition smooth.”