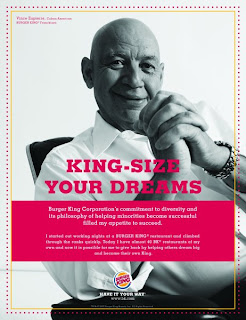 Two months after consolidating some major advertising assignments, the Burger King Corporation is paring its agency roster again, this time affecting agencies that specialize in marketing to African-American and Hispanic consumers.

The changes, to be announced on Tuesday afternoon, are indicative of a trend that has accelerated as younger consumers, who are often less likely to use traditional labels of race and ethnicity, have become more of a force in the consumer marketplace. As a result, advertisers are rethinking their decades-long approach of assigning duties for minority markets to agencies that specialize in those markets.

Those shifts, by advertisers like Home Depot, have stirred spirited discussion, however, as some shops that are owned by members of minority groups call it ill-advised to remove them from agency rosters in favor of general-market or mainstream agencies.

Burger King is making the changes “based on where our consumer is,” Mike Kappitt, chief marketing officer for North America, said in a phone interview, particularly when considering “the X and Y generations” and their beliefs in the “melting pot.”

Consolidating the assignments will provide “a consistent voice,” he added, without overlooking minority consumers.

Leo Leon, vice president for marketing impact at the Burger King North American operations, estimated that a third of the United States population is composed of minority-group members.

“We felt the right decision for Burger King is to address all our consumers as a whole,” he added, “instead of taking a segmented approach.”

Burger King will consolidate the duties to create campaigns for adults, whatever their ethnicity, at Crispin Porter & Bogusky in Miami and Boulder, Colo., The agency, owned by MDC Partners, is responsible for ads aimed at the general market and has also been creating most ads aimed at black consumers.

The decision means that LatinWorks in Austin, Tex., will no longer create campaigns for Burger King aimed at Hispanic consumers. And the UniWorld Group in Brooklyn, N.Y., which has been creating some national radio campaigns aimed at the African-American market, will relinquish those duties as well.

Burger King will continue to run ads for Hispanics in Spanish as well as English, Mr. Leon said, adding that Crispin Porter had already “helped out a little” with the creation of ads in Spanish.

Although LatinWorks is losing its Burger King business, it was named last week as the new Hispanic creative agency in the United States for the Chevrolet division of General Motors.

Burger King is also consolidating the assignment for what is known as field marketing, which involves sending agency representatives into local and regional markets to help a company sell goods and products on the grass-roots level.

The assignment, which had been divided between UniWorld and Wunderman, part of the Young & Rubicam Brands division of WPP, will now be handled solely by Wunderman. Most of the field team members at UniWorld who currently work on the Burger King account who will be offered jobs at Wunderman, the Burger King executives said.

Although the Burger King executives did not disclose the spending for the assignments that are being shifted, they said that they planned to increase the amount of money spent on ads aimed at black and Hispanic consumers by more than 30 percent.

The last time Burger King trimmed its agency roster came in June, when Burger King dismissed Campbell Mithun in Minneapolis, part of the Interpublic Group of Companies, which had been handling ads aimed at children and families. That assignment was consolidated at Pitch, an agency in Culver City, Calif., that has been the promotions agency of record for Burger King.

The changes in the Burger King agency line-up come after the hiring of a new global chief marketing officer, Natalia Franco, who had worked at Coca-Cola.

Wow, this announcement is a whopper—and it looks like the minorities got flame-broiled. Yet there’s no mention of the proceedings at Advertising Age and Adweek. And it only rated appearing in the blog of New York Times ad journalist Stuart Elliott, who has never really shown interest or expertise in non-White advertising.

Uniworld had been handling Burger King since 1983. Elliott mentioned that the agency created radio campaigns for the fast feeder, so maybe the shop was being quietly phased out. LatinWorks picked up Hispanic-focused duties in 2009. Regardless of the length of service, to completely abandon partnering with minority shops is a dramatic decision for Burger King. Kinda bullshit too.

Burger King spinning this as “the-youth-market-believes-in-a-melting-pot” is a crock. It’s more like the fast feeder believes in putting its marketing budget into one pot. Besides, it’s no secret that most of the cultural trends among youth originate with minorities. Even idiots including Marian Salzman recognize the reality. BK’s position should have led to increasing minority involvement.

Elliott wrote that CP+B “is responsible for ads aimed at the general market and has also been creating most ads aimed at black consumers.” Um, CP+B is not qualified to speak to non-White audiences, as they’ve produced some polarizing and culturally clueless communications over the years.

Additionally, CP+B has acknowledged the industry is lacking diversity—essentially admitting to the color deficit in its own hallways. The move to award business typically slotted for minority agencies to a White agency flies in the face of BK’s alleged commitment to supplier diversity. Perhaps CP+B will address this when tasked with developing diversity campaigns as depicted at the top of this post.

What’s with the plan to bump spending for minority audiences by over 30 percent? Did CP+B realize it could never operate with the minimal money minority agencies usually receive? Or is BK trying to combat potential negative reactions by appearing to be generous to the colored people? BTW, a 30 percent raise probably still equals a substandard total.

In the end, “Have it your way” no longer applies to minorities.
Posted by HighJive at 12:29 PM

Pretty sad statement for bk. sadder for the public.

A White company choosing a white agency/ "We don't need no stinking minority agency to speak to minorities." It was only a matter of time. Minority agencies are there to do only one thing--help the client speak to minorites. GM agencies have already proven that they can do a similar if not better job than minority agencies in speaking to a minority target audience. Once more clients catch on, more minority agencies will be cut out too. Its a recession and I'm sure more GM are grabbing, plotting and scheming on how they can take and convincing more of their clients that they can do a better job to speaking to ethnic consumers. As evil as it sounds more clients are agreeing. Look at home depot etc,