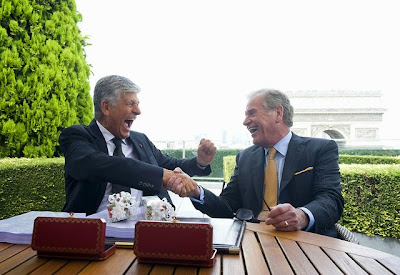 Advertising Age reported Publicis Groupe and Omnicom will have to deal with a $500 million termination fee if they fail to consummate the merger. Should the deal evaporate, each holding company ought to be required to also spend $500 million on diversity initiatives. Surely Pioneer of Diversity John Wren would endorse such a proposal.

Putting the Odds on a Publicom Collapse

Companies Got Into This Together, and Would Have to Get Out of It Together

Tax hang-ups, regulatory delays and behind-the-scenes struggles have industry executives and analysts increasingly banking on a collapse in the planned merger of ad giants Omnicom Group and Publicis Groupe. “There is evidently a realistic chance that the merger with Publicis will not be completed, whether due to external factors or management preferences,” Pivotal Research Group analyst Brian Wieser said in a research note to investors late last month.

Progress seems stalled enough that Albert Fried analyst Rich Tullo lowered the chances of completion to 40% from 66% in a research note last week first reported by The Wall Street Journal. An Omnicom spokeswoman declined to comment; a Publicis spokeswoman in Paris did not respond to a request for comment Friday afternoon in New York.

But don’t expect either side to storm away on its own—even if one CEO starts to feel like he’s losing battles, like the fight to install his favorite as chief financial officer. The $500 million termination fee disclosed in a filing last summer and lately resurfaced in pessimistic press reports means that any unilaterally quitting party has to pay that sum.

Such terms are meant to keep both sides on track and interlopers out, according to David Grinberg, partner and chairman of the mergers-and-acquisitions group at law firm Manatt, Phelps & Phillips. If rival WPP Group got Omnicom to take an offer and abandon Publicis, for example, Omnicom would have to pay Publicis the termination fee. But absent a better offer, neither Publicis CEO Maurice Levy nor Omnicom CEO John Wren will try to sell shareholders on eating the cost of solo withdrawal.

So if the merger fails, it will be by mutual agreement. “If a buyer comes in, they now have to overbid and pay a fee,” Mr. Grinberg said “But if it falls apart for internal reasons, it’s much rarer to have a fee because they’ll look for reasons not to.”

In the meantime, costs continue to pile up. Omnicom has already sunk more than $48 million of pre-tax expenses into merger preparations, according to filings. And investors seem to be gravitating toward their rivals. Share prices have grown at all four top agency holding companies since the merger was announced, but they rose nearly 10% at WPP and Interpublic, compared with roughly 3% growth for Omnicom and Publicis.

“Time is not necessarily a friend,” Mr. Grinberg added. “If the deal drags on, people get deal fatigue and start to psychologically become negative on a deal.”