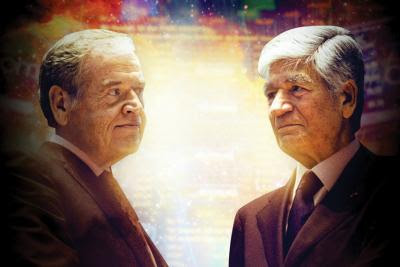 Adweek and Advertising Age reported the proposed merger between Publicis Groupe and Omnicom has fizzled out. Guess this frees up Pioneer of Diversity John Wren to focus on bringing inclusion and racial harmony to the industry. Yippee!

What were they thinking in the first place?

Now that Publicis Groupe and Omnicom have called off their $35 billion merger, the differences between the two companies as they attempted to combine their operations seem more glaring than any common vision of “equals” they trumpeted back in July. After the flourish in Paris of signing off on a doomed transaction, the relationship between Publicis CEO Maurice Levy and Omnicom counterpart John Wren quickly soured amid a power struggle for control and consensus upon management structure.

In recent months, it was a question of not if, but when, the two companies would call off the deal. Publicly, the merger has taken farcical turns. While Publicis’s Levy was telling analysts there were no tax issues beyond the usual French oversight, Omnicom’s Wren was advising investors that U.K. tax residency problems could be a dealbreaker for the Netherlands headquartered Publicis Omnicom Group.

Then on April 29, Le Monde, France’s newspaper of record, published an incendiary article calling the transaction a Publicis takeover of its much larger American counterpart, in all but name. Many observers believed both companies would pull the plug in mid-June after the Chinese regulatory approvals did not come through, as widely expected would be the case, and would provide a face-saving out for the proposed merger.

The official explanation put out by Omnicom about ending the transaction is that "in view of difficulties in completing the transaction within a reasonable timeframe the parties have released each other from all obligations with respect to the proposed transaction…" As such there will not be a $500 million termination fee incurred by either company.

In an internal email, Wren further explained the merger's collapse to Omnicom staffers:

“When we first communicated with you about the proposed merger last July we knew that the transaction was complex, with multiple regulatory and tax approvals to be secured before we could execute it. At the time we thought it would take a little over six months.

Over the past nine months it has become increasingly apparent, to both parties, that it is not clear how long it would take to resolve the open issues.

As you know a good concept is worth nothing unless it can be brilliantly executed in a timely way.

Both parties have now decided that it is in the best interest, therefore, of you, our people, our clients, and our shareholders to terminate the proposed merger.

Over the last year there has been a great amount of work done on the deal by a small group of Omnicom executives and a much larger group of advisors.”

To be sure that much larger group of advisors was at work: As of the end of 2013, Omnicom said it spent $41.4 million in pre-taxes charges related to the deal and another $7 million in the first quarter. (Publicis spent $52 million on merger-related expenses last year but has not yet detailed expenditures this year.)

Now it remains to see what the industry’s most high-profile, expensive failed transaction will do to the reputations of the companies’ two chief executives in the twilight of their careers who are considering their own legacies.