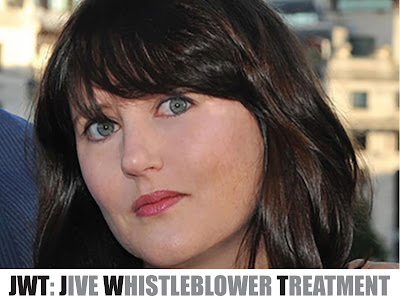 Adweek reported on the latest nonsense involving JWT and Global Communications Officer Erin Johnson, who returned to work despite still pursuing her discrimination lawsuit against the White advertising agency and White holding company WPP. Johnson and her lawyers are now claiming that JWT is messing with the Global Communications Officer, prohibiting her from resuming her original responsibilities. Then again, if Johnson proceeded to serve as Global Communications Officer, she’d likely spend the majority of her days responding to press inquiries about her own status and lawsuit details. Can someone actively suing a company also operate as a credible spokesperson for the enterprise? The industry standard in these scenarios—where a minority is charging a White advertising agency with discrimination—involves expelling the complainer from the company and ejecting the individual from the entire field. It will be interesting to see how a White woman fares in this situation.

What’s it like to return to work eight months after you filed an explosive lawsuit that led to the ouster of your agency’s global CEO?

For Erin Johnson, worldwide PR chief for J. Walter Thompson, the experience has been like being placed “in a box” with little actual work to do and a looming sense of being an outcast among her peers.

At least that’s the way her return was described in a letter filed in court by her legal team late Thursday. The lawyers representing Johnson were requesting a conference with the judge to discuss a potential injunction that would stop the agency from “unlawful conduct” in the way it treats her now that she’s back at work.

According to the law firm—Vladeck, Raskin & Clark—JWT has engaged in this conduct with the ultimate goal of pressuring Johnson to resign.

Johnson returned to work last week with the lawsuit still ongoing. Her legal team’s letter asserts that JWT CEO Tamara Ingram has since put her “in a box” by seating her in a cubicle directly in front of the head of HR and making it “clear that Johnson would no longer be permitted to do anything that resembled the duties of her prior position as chief communications officer.” It continues: “Johnson has virtually no work to do. … As a result of defendants’ retaliatory actions, plaintiff is nothing more than a pariah at JWT.”

Johnson sued the agency and its now-former CEO and chairman Gustavo Martinez in March for allegations of discriminatory behavior that allegedly included anti-Semitic statements and an incident in which Martinez allegedly told Johnson in front of her co-workers, “Come here, so I can rape you in the bathroom.” He resigned the following week.

The legal team now claims that JWT and its leadership engaged in “multiple acts of retaliation” against her and “attacked her personally” during her subsequent leave of absence. It also states that, since returning to work at the WPP shop’s New York office last week, Johnson has experienced “demeaning treatment” designed to prevent her from interacting with co-workers.

“Defendants’ mistreatment of plaintiff is designed to deter witnesses” who might testify on her behalf, the letter reads, claiming that “several sources” confirmed to Johnson that those plans “have succeeded.”

The Nov. 1 announcement by global CEO Tamara Ingram that Johnson would return to work surprised many in the industry, and this week’s letter claims that lawyers for JWT misrepresented her reasons for doing so during a court session on Sept. 9. On that date, the JWT team said Johnson had resisted “‘repeated attempts’ to have her come back to work.” Johnson’s legal team states in its letter, however, that the agency later acknowledged discussing only the general possibility of her returning. Those discussions reportedly ended in June.

Johnson allegedly tried to get JWT to discuss the exact nature of the work she would do upon her return, but the agency “dismissed [her] legitimate questions” by insisting that her job would be exactly the same as it was before the lawsuit was filed, her lawyers stated.

Johnson’s legal team asserts that JWT falsely blamed Johnson’s “refusal to assume many of her former responsibilities.” The letter goes on to claim that Ingram “chided” Johnson for bringing negative attention to the agency by returning to work.

Finally, the letter states that, when asked how long Johnson would remain “in a box,” Ingram said, “How long do these things take? … It could take a long time.”

Johnson’s lawyers assert that all of these actions have amounted to an attempt to get her to resign from her job. They called for the judge in the case to schedule a conference regarding a preliminary injunction or restraining order that would order all agency leaders to “stop the retaliatory conduct” immediately. “Here, JWT has positioned Johnson as a suspect character, not fit to supervise staff, communicate with the press or former colleagues, or otherwise reassume the job she had performed successfully for a decade,” the letter reads.

When asked for comment, a JWT spokesperson wrote, “We will respond to the request at the appropriate time in the court proceeding.”

She has held on longer than most ethnic minorities bringing a lawsuit against an ad agency have held on, that's for sure. She must have legal friends in powerful places.

This is a great lesson to anyone thinking of bringing a lawsuit in the future, though.

Even video of an agency leader joking about Black people being rapists isn't enough to cause an agency to admit fault of any kind.

Instead, they'll spin it and attack the messenger.

Not sure why agencies insist on pretending to care about diversity when they've shown time and time again that they just do and say whatever they want with no consequences at all.