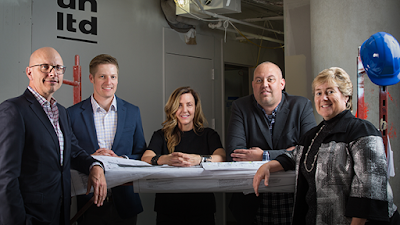 Adweek reported on the McAgency of the Future—officially called We Are Unlimited—and unveiled the key leaders of the dedicated enterprise. The photo accompanying the story (depicted above) confirmed DDB CEO Wendy Clark’s restless ambition “to be as diversely inclusive as the marketplace that we serve on behalf of our clients” is a total lie. McBabel is unlimited McBullshit.

Following months of speculation, Omnicom and McDonald’s announced the launch of their new dedicated unit We Are Unlimited today in Chicago.

The shop will go by Unlimited and serve only the fast food giant, with former BBDO New York senior director Brian Nienhaus acting as CEO and reporting directly to Wendy Clark, the DDB North America chief executive who led the McDonald’s pitch.

“Brian’s experience leading integrated teams that span digital, social, sponsorships and traditional advertising working across multiple Omnicom sister agencies, many of whom are part of Unlimited, has uniquely qualified him to take the reins as CEO of this agency,” said Clark in a statement.

Clark and McDonald’s CMO Deborah Wahl referred to the unit as an “agency of the present” at Advertising Week in 2016, in referring to what they claim to be an unprecedented degree of integration. To that point, Unlimited includes “embedded” teams from such disparate organizations as The Marketing Store, Facebook, Google, Twitter, Adobe and The New York Times’ T Brand Studio in an attempt to more effectively coordinate all of the chain’s massive marketing efforts.

McDonald’s consolidated its marketing business with Omnicom in August following a four-plus month review, thereby ending a 35-year relationship with Publicis and Leo Burnett Chicago. The review initially included all three of the industry’s largest holding companies, but WPP dropped out in May, allegedly in response to contractual agreements that would have the winning unit operate at cost until reaching unspecified revenue goals. McDonald’s never commented on what some in the industry called “unheard of” demands.

Nienhaus said, “I’m incredibly honored to assume a leadership role in changing the way agencies deliver client solutions. To do so in partnership with McDonald’s, one of the world’s most iconic brands, and the stellar team we’ve brought together, is both exciting and humbling.”

He promised that the agency, which will employ approximately 200 “brand practitioners” in its new Chicago headquarters, will be fully staffed by the time operations officially begin on January 1, 2017.

McDonald’s spent approximately $820 million on measured media in 2015 according to Kantar Media.

US brands and agencies subscribe to the Emperor's New Clothes version of diversity.

The truly think that if they say the word "diversity" enough, and talk about how much they champion it, no one will ever notice that it's just words backed up by no action.

And you know what? No one ever calls them out on it. So this McBullshit monstrosity of agency leftovers smashed together can get away with saying how "diversely inclusive" they are, and business goes on like it has since the 1950s. With nobody black or brown (unless imported on a visa from overseas, or starring in the commercial) in any real position of importance.

Chicago refuses to recognize. People are fleeing Unlimited faster than HR can hire replacements. And everyone of color who stays finds themselves reporting to yet another wanna-be badass with a culture appropriated style. After all these years, it's still a segregated city.