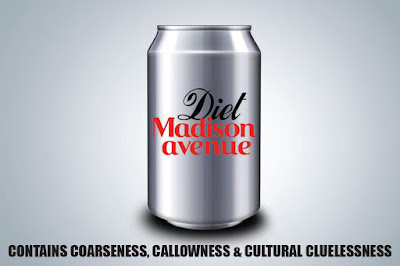 Full disclosure: Despite commenting twice about Diet Madison Avenue, as well as making references to it in recent posts, the MultiCultClassics staff had not bothered to actually peruse the anonymous Instagram account. Upon finally scanning the DMA content, it’s safe to say the first visit was the last.

Sorry, but Diet Madison Avenue doesn’t live up to the hype. Indeed, DMA exposes key problems with the divertsity movement, and it also suffers from key problems in general.

Key Problem 1: White women aren’t unified on the issue. Just as White females in adland have disagreed over things including the prevalence of a glass ceiling, reasons for not advancing and whether or not the business is tough for women, the ladies are unable to reach a consensus over the value, tactics and tone of Diet Madison Avenue.

Key Problem 2: White women are not very supportive of each other. This is common knowledge, and the dilemma is intensified in a field where agencies compete against each other and/or exist in silos within holding companies. Plus, in the advertising industry, White women have conspired with White men to perpetuate the exclusivity—so they are not very supportive of minorities too.

Key Problem 3: Tied to the previous problem, White women are not strong champions of true diversity. In regards to Diet Madison Avenue, the attempts to broaden the message to embrace racial and ethnic equality and other semi-related topics come off as uninformed, unconvincing and untrustworthy bullshit.

Key Problem 4: Vigilante justice is bad enough. Anonymous vigilante justice is pathetic—and potentially as illegal as the alleged misdeeds being exposed by Diet Madison Avenue. The DMA posse insists they have collaborated with lawyers, PhD students and professors. Um, PhD students and professors are useless—especially when they are unidentified. And any lawyer approving DMA’s tactics is a world-class idiot and professional hack.

Key Problem 6: The DMA posse is as hateful as the alleged perpetrators. In scenarios where the term misogyny is often used, the anonymous Instagram account introduces misandry. And the misandry is delivered with meanness and immaturity, which heightens the ignorance. This becomes a key problem on two fronts. First, like it or not, sexual harassment in the advertising industry won’t be eliminated without the deliberate backing and participation of White men. So injecting misandry makes it difficult to woo White male advocates. Second, the mean and immature tone—which is also directed towards any critics of DMA efforts—runs counter to the methods of successful protestors throughout history. Love, poise and intelligence have proven to be the best weapons for progress against hateful actions. Snarky obscenities ultimately hurt the cause.

Key Problem 7: DMA is a branding fail. Its core message is too unfocused, partly due to the aforementioned broadening of its content, but mostly due to a sloppy strategy and mindless execution. The DMA posse clearly doesn’t have the cultural competency needed to tackle the subject matter. Hell, they don’t even appear to have a basic understanding of HR-related practices and legal perspectives. DMA is a poor (wo)man’s TIME’S UP. It’s ironic that many of the recently fired offenders were Chief Creative Officers, because DMA desperately needs a skilled creative director. Then again, The 3% Movement could probably recommend female creative directors.

Key Problem 8: Diet Madison Avenue is unoriginal, unenlightened and uninspired. This key problem dovetails with the previous key problem. The DMA self-description says it all: “Exposing sexual harassment & discrimination in ad agencies since Oct 2017, cuz HR won’t.” First, why did the DMA posse only launch the revolution six months ago? Sexual harassment and discrimination have plagued Madison Avenue for over 60 years, and discrimination has festered for longer than sexual harassment. Could it be that the DMA posse is actually comprised of opportunistic narcissists jumping on the #MeToo bandwagon? Wonder if they realize #MeToo was founded by a Black woman initially seeking “to help survivors of sexual violence, particularly young women of color from low wealth communities, find pathways to healing.” Sorry, but DMA appears to be most concerned with themselves, followed by White women—and everyone else is relegated to a distant third place. Second, to declare DMA actions are necessary “cuz HR won’t” meet their responsibilities displays more ignorance. Sadly, the majority of HR directors don’t have the political power to expel the perpetrators. DMA ought to target the advertising agency leaders who have shielded sexual harassers—including calling out the women who signed the TIME’S UP Advertising manifesto, as these female leaders should have wielded their power to address matters versus turning blind eyes and deaf ears for decades.