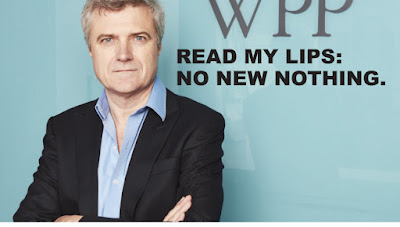 Advertising Age reported new WPP CEO Mark Read declared the White holding company must have stronger businesses delivering “better work, better strategy, better reputations.” Gee, the guy sounds like Papa John’s. And like the pizza maker, Read avoided discussing diversity during his first call with investors and analysts as the official chief executive—which was a missed opportunity, as WPP being “perhaps the most diverse example of diversity of any single organisation” is one of the few bragging points left. Meanwhile, Sir Martin Sorrell couldn’t avoid commenting on Read’s promotion, calling the succession process “a complete waste of time” given that the selection of a White man was a done deal. Plus, Sorrell insisted the CEO role should be shared between Read and Andrew Scott. Leave it to a Napoleonic narcissist to believe two men should replace half a man. Actually, Read did comment on diversity of talent in regards to recent hires. According to Ad Age, “[Read] also said the group needs to hire a different mix of talent, perhaps people who have consultancy experience and who understand how both agencies and technology work. He mentioned major new hires that had experience at Accenture and Deloitte Digital.” Okay, but Accenture and Deloitte are not exactly meccas of diversity. And Read—like his predecessor—is not exactly a defender of diversity.

On Mark Read’s second official day of work as the new chief of WPP, he fielded questions from investors and analysts about his vision for the company and how the company will face increased competition from consultants and clients bringing their accounts in house. The world’s largest holding company saw shares tumble upon its second quarter earnings Tuesday.

WPP posted organic growth of 0.7 percent in the second quarter, but reduced its margin guidance for the year as it plans to spend more to spur growth. Read said the company is reviewing strategy as it pertains to structure, underperforming operations and how WPP will position itself for the future, and said that the company will issue updates by the end of the year.

“We’ve had one quarter of growth,” Read said on a call with U.S. analysts, saying this was the company’s first quarter of like-for-like net sales growth since the first quarter in 2017. “It’s too early to declare victory, though it is a positive step.”

Read said the company’s priorities lie in strengthening its creative agencies (saying “We need to have stronger businesses with better work, better strategy, better reputations as well as ensure that those companies have the capabilities that they need to grow”), as well as in data investment management. WPP will also focus on improving its performance in North America. The region saw like-for-like net sales decline by 3.3 percent in the second quarter.

“Changes seem inevitable, with fewer agency brands, for example, and some kind of change to the way in which Kantar is situated within WPP seems likely too, especially considering the expected auction for Kantar’s direct competitor Nielsen,” Pivotal senior analyst Brian Wieser wrote in a research note.

“However, we think that growth will mostly be a function of execution in adapting to evolving client needs with investments around internal and external e-commerce, data and consumer experience-focused capabilities,” Wieser wrote. “We think it is particularly positive for WPP that its new CEO has extensive experience in these areas, which should be helpful for the company as it evolves going forward.”

In a research note, Liberum Capital said it “would not expect a revolution in its approach nor a breakup, but we would expect a significant evolution.”

The note added that WPP’s claim it will address underperforming units raises the possibility the holding company may look to dispose of “at least significant parts of its Market Research (what it calls Data Investment) assets.”

This “would have the dual benefit of both improving the stated performance of the group and essentially resolving any balance sheet concerns, thus allowing WPP greater flexibility to drive growth,” the note said.

Analysts asked on the call how the company is thinking about competition from consultancies like Accenture and Deloitte, which are increasingly sparring against traditional agencies for pieces of business. Some clients are also bringing business in-house that was traditionally relegated to their agencies.

Read said WPP needs to understand how to implement marketing technology to help clients develop programs that run through from strategy, creative and execution of technology. He also said the group needs to hire a different mix of talent, perhaps people who have consultancy experience and who understand how both agencies and technology work. He mentioned major new hires that had experience at Accenture and Deloitte Digital.

Read also defended agencies’ ability to do much of that work better than consultancies.

“The value of our business is the ability to generate ideas to inspire consumers, to develop visions around how companies can grow, and I do think that agencies are better qualified to do that than consultants that tend to write hypotheses at the beginning of the project then spend the next three months proving the conclusion they’d come to at the start of the process.”

He added that WPP’s agencies need to be more amenable to working onsite with their clients.

“It’s something where historically agencies have been reluctant to let people work outside their operations and the consulting firms have been more familiar to do that,” he said. “I’d like to see any of our clients looking to outsource anything to consultants or bring them in-house — they should have a conversation with us. I think we can very effectively develop solutions with them … I think it’s an opportunity for us if we do it correctly.”