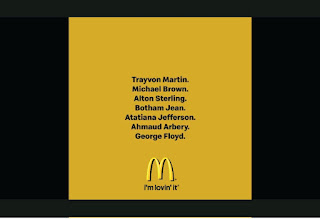 Advertising Age spotlighted the Mickey D’s “Black Lives Matter” video. Okay, but it must be noted that the fast feeder gave the assignment to White advertising agency Wieden + Kennedy. Perfect.

McDonald’s has long courted black customers, franchisees and restaurant employees. On Wednesday, it posted a 1-minute video to social media that begins with a list of names of George Floyd and others who have been killed, including Trayvon Martin, Michael Brown, Alton Sterling, Botham Jean, Atatiana Jefferson and Ahmaud Arbery..

“They were all one of us,” red text reads on a yellow background. McDonald’s later says that it is donating to the National Urban League and the NAACP. The background goes from yellow to black as the line “Black lives matter” appears on the screen, followed by the McDonald’s logo. The video was created by Wieden & Kennedy New York.

A day later, McDonald’s returned to add a tweet to its thread and a comment to its Instagram post, which both read: Because some of you are asking, and it matters to us that you all know, McDonald’s does not contribute to presidential candidates.” Those updates came after some people called out McDonald’s in comments on its initial Black Lives Matter posts, suggesting that the company funds President Trump’s campaign.